Why we’re working to end the death penalty 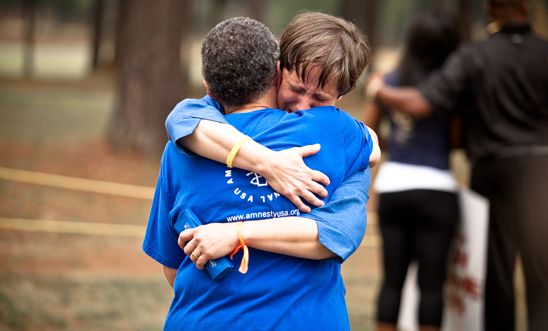 At Amnesty International, we firmly believe that no one – including any government – has the right to take away someone else’s life. We’re working to end the use of the death penalty around the world, and won’t stop until every country in the world has abolished it.

What is the death penalty?

The death penalty (also known as capital punishment) is the premeditated, judicially sanctioned killing of an individual by a state. It’s an irreversible and violent punishment that has no place in any criminal justice system.

We oppose the use of the death penalty in every single case. No matter what the crime, who the alleged criminal is, or the method proposed to execute them – we will always stand against it.

Why are we against it?

There are many reasons that the death penalty is an unacceptable punishment.

First and foremost, sentencing someone to death denies that individual two vital human rights guaranteed under international law, as established by the 1948 Universal Declaration of Human Rights (UDHR):

Our aim at Amnesty is for every person on the planet to enjoy their human rights, as enshrined in the UDHR and similar international human rights standards. The death penalty violates basic human rights in every case.

People in favour of the death penalty often say that it’s a useful deterrent for the most abhorrent crimes in society – but evidence shows that this isn’t the case.

A 2012 report by independent researchers at America’s National Research Council of the Academies found that US states using the death penalty have a similar murder rate to states that don’t use it: the threat of capital punishment did not appear to prevent homicides.

Execution is the ultimate, irrevocable punishment: the risk of executing an innocent person can never be eliminated. And such mistakes cannot be unmade.

Since 1976, 143 US death row prisoners have been exonerated completely for their crimes. Who knows how many have been executed for a crime they did not commit? The flaws in state systems that dole out the ultimate irreparable punishment have been documented in the One for Ten film project.

The countries executing the most people are often the same countries about which we have serious concerns regarding the fairness of their judicial systems.

The ‘top’ three executing countries in 2012 – China, Iran and Iraq – are all guilty of issuing death sentences under circumstances that are far from transparent.

China is the world's most prolific executioner. But use of the death penalty in the country is regarded as a state secret; we suspect, based on all the evidence we have, that thousands of people are executed in China every year, but without credible information from the Chinese state government, we cannot know how many death sentences are issued and executions carried out every year.

In both Iraq and Iran, many death sentences are issued after convictions relying on ‘confessions’ from prisoners that have been obtained by force, often through torture in detention. We have reliable information that prisoners later sent to Iraq’s death row have been beaten with cables, suspended by their arms, and subjected to electric shocks.

You are more likely to be sentenced to death if you are a member of a minority group within a state that executes. The death penalty disproportionately affects members of racial, ethnic and religious minorities, as well as those living in poverty.

In the US, there's extensive evidence of racial bias on death row. The race of the victim remains the single most reliable factor in determining whether a defendant will be given a death sentence. For example, a 2007 study in Connecticut showed African American defendants to be three times more likely to receive the death penalty than white defendants, where the victims are white.

Serious mental health issues are also common in defendants sent to death row. At least one in ten prisoners executed in the US between 1977 and 2007 had experienced severe mental health problems that meant they were literally unable to comprehend the crime they were alleged to have committed, and unable to understand the terms of their sentence and imminent execution.

6. It can be used as a political tool

You are more likely to be sentenced to death if state authorities see you as a threat.

Authorities in Iran, Sudan and Saudi Arabia all have a track record of issuing death sentences to opposition activists or potential threats to those in power.

Where is the death penalty used?

A small number of countries around the world continue to sentence people to death. The number of states carrying out executions is steadily decreasing, year on year: we have charted a worldwide trend towards abolition since we began campaigning for it.

Thousands of people remain on death rows awaiting execution in prisons around the world, and many hundreds are still executed in a minority of states every year.

See our latest stats on the death penalty in 2016