Iran is sentencing children and teenagers to death 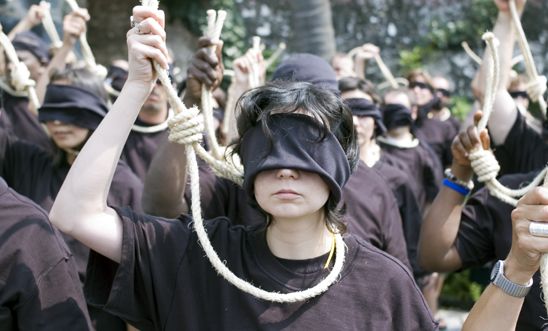 Before they even reach adulthood, Iran is ending their lives. There are scores of young offenders on death row in Iran, and the authorities are continuing to sentence them to death.

Girls as young as nine can be sentenced to execution; for boys it’s 15. At least 73 young offenders were executed between 2005 and 2015. And the authorities show no sign of stopping this horrific practice.

We have the details of 49 people on Iran’s death row who were under 18 at the time of the crime they are alleged to have committed. The UN says there are at least 160 such people facing execution in the country. In fact, there are likely to be many more young offenders on Iranian death rows, as use of capital punishment in Iran is often shrouded in secrecy.

Read the research in full in our new report

Growing up on death row – before they are hanged

Young people condemned to death in Iran spend an average of seven years on death row before being taken out of their cells to be hanged, though in some cases juvenile offenders have spent over a decade on death row.

In a number of cases the authorities have scheduled the executions of juvenile offenders and then postponed them at the last minute, adding to the mental and physical ordeal of imprisonment on death row – a practice that is cruel, inhuman and degrading.

Under international laws guiding use of the death penalty, it’s illegal to execute someone who was under 18 when they allegedly committed the crime. Despite this, and despite Iran having ratified the Convention on the Rights of the Child decades ago, our research shows that Iranian authorities executed at least 73 juvenile offenders between 2005 and 2015.

Claims of reform not reality

Iranian authorities claim that they have reformed their justice system after facing repeated criticism for executing young offenders in the past.

Updates to the country’s Islamic Penal Code (2013) allow judges to consider the mental capacity and maturity of the young offender, where they’re being tried for a crime that recommends capital punishment for adults. In 2014, Iran’s Supreme Court also said that all juvenile offenders on death row could apply for retrial.

But little has changed in practice.

The death penalty in Iran

Iran is the world's second-most prolific executioner, and last year the executions increased.

In 2015, Iranian authorities executed at least 830 people between 1 January and 1 November - at least four of them were reportedly young offenders.

The vast majority of executions in Iran are for crimes such as drug-related offences where international law clearly prohibits the death penalty as the offences are not 'the most serious crimes'.

At Amnesty International, we are campaigning for an end to the death penalty around the world as it violates many human rights.

Downloads
Report: Growing up on death row - the death penalty and juvenile offenders in Iran
Details of juveniles on death row in Iran