The right to protest is a fundamental right and a vital way for children to make their voices heard in a democracy, particularly when they are denied the right to participate in the democratic system by voting.

There is a long history around the world of children taking action to defend human rights, which continues today. Whether it is tackling racism, disability discrimination, the impact of climate change, or the treatment of refugees, children are standing up for human rights and making their voices heard.

Recently, the School Strikes for Climate had a powerful impact in 2019 as children around the world demanded government action on the climate crisis.

The UN Convention on the Rights of the Child provides vital rights for children who are campaigning for human rights, including rights to freedom of expression, freedom of association and freedom of peaceful assembly.

However, all too often the rights of child human rights defenders to take action and campaign in defence of human rights are restricted or denied.

Last year the Rights of Child Human Rights Defenders: Implementation Guide by Child Rights Connect was launched. It acknowledges that children are acting to defend human rights around the world and provides guidance on empowering them to do so without breaches of their own rights or unnecessary restrictions.

The guide describes the challenges and barriers which child human rights defenders face including: ‘not having access to information, including about their rights; not being taken seriously by adults; receiving physical and verbal abuse and threats online and offline; being prevented from action by their families, elders, schools or the police; and not having access to or information about effective supports or remedies.’

Child human rights defenders also face punitive measures as school for exercising their rights to take action to defend human rights. Children may face disciplinary measures, including suspension from school, for their peaceful human rights activity, such as attending a protest.

We believe that children have the right to take action in defence of human rights, and should not be penalised for exercising their rights. We are launching a campaign to call on the nations of the UK to ensure that children are protected from being penalised at school for carrying out human rights defending activity.

Police, Crime and Sentencing Bill – Attack on the Right to Protest

Children protesting in defence of human rights face proposed new legislative restrictions. The Police, Crime and Sentencing Bill is currently in Parliament. It has been passed in the House of Commons and is now being considered by the House of Lords.

The Bill has been described as an assault on our freedoms, threatening the right to peaceful protest by giving the police more powers to restrict, criminalise and shut down peaceful protest. 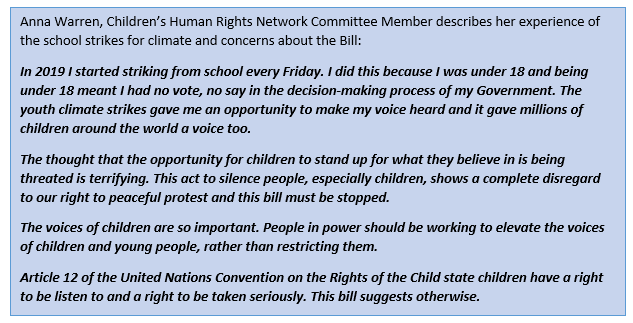