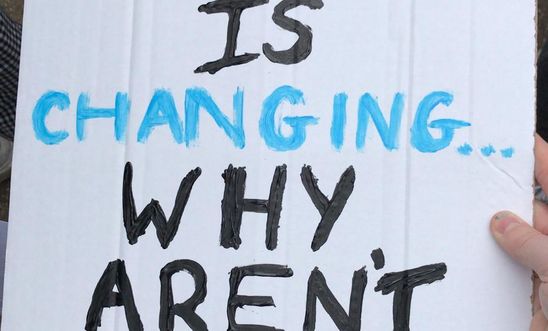 On Friday the 12th of April over one million children all over the world took to the streets for the second time. We were united over one issue: the lack of government action on the climate crisis.

We are scared and uncertain about our future and refuse to sit back and watch our government simply ignore this issue that will fundamentally shape our adult lives. The UN Convention on the Rights of the Child states that we have a right to a healthy and clean environment, a right to be listened to and the right to be taken seriously.

Yet, we are not listened to.

We are not taken seriously.

We are sick and we are tired of being excluded and ignored by a democratic system to which we have no access.

We refuse to sit back while our politicians deprive us of our rights.

As we strike from school, we demand that our politicians put future generations before party political gain.

The youth are the leaders of tomorrow. We are the ones taking action and seemingly some of the few who care. I went to the Climate Strike in Glasgow because I am not taken seriously, not heard or listened to by those who have power to make the decisions. The adults deem the youth as irresponsible, reckless and selfish. Call it a ‘stage’ and that we are ‘acting out’.

We are acting out. But not for irresponsible and reckless reasons.

We are acting out for the future of our planet. As horrible as it is to admit, climate change is an issue that has been ignored for much too long and only ultimately futile efforts have been made to mitigate the issue. Now the youth are taking action and demanding climate justice for our future. We are demanding an earth to still be there for our future generations.

Many people think our protests are making no difference. They think we are throwing our lives away by skipping school. I hope in years to come these doubters look around and see the future generations thanking those who took the risk and voiced their concerns about the future of the planet. Standing up to climate change is something we won’t regret, what we will regret is if we don’t act quickly enough. The youth climate strike was a safe, peaceful and wonderful protest, one I will not forget for years to come and certainly not one I will regret.

I've been waiting for a movement like this ever since I first learned what climate change is. The Youth strike movement is a great step in the right direction and is just the kind of revolution we need. In recent years, I've become extremely disenchanted with the state of politics, with the youth voice consistently ignored and our futures put in jeopardy in the name of profits. After Friday, seeing how many like-minded individuals my age there are out there, I'm beginning to feel a sense of hope again. But I'll never be truly satisfied until the government listens to us and declares a state of climate emergency.