'Right To Vote' is a focus for the Children's Human Rights Network going forward, and the campaign is currently in its infancy.

Children are human, but do not have full access to their human rights. In some cases, this may make sense, given their time of life. However - the Universal Declaration of Human Rights states:

(1) Everyone has the right to take part in the government of his country, directly or through freely chosen representatives.
(2) Everyone has the right of equal access to public service in his country.
(3) The will of the people shall be the basis of the authority of government; this will shall be expressed in periodic and genuine elections which shall be by universal and equal suffrage and shall be held by secret vote or by equivalent free voting procedures.

Unlike other rights, such as the right to marriage, the UDHR does not limit this right by age. Nor should it; point 3 is clear that the basis of government authority will be the "will of the people" - not of some of the people. Children are subject to the society governments manage; the laws they pass, the taxes they implement, the protections they oversee and the responsibilities they demand.

Children are the exclusive beneficiaries of the primary and secondary education system, of many parts of the care system, and of countless areas of state action - but have absolutely no say over the people who govern the direction of the state.

Children in the UK are tried for crimes as adults from as young as 10 years old. The military recruit from 16 years old - and require people joining at this age to serve until they are 22. Children can leave home - or be ejected from their home - at 16, drive at 17, get married at 16 (with consent, in England, Wales and NI, without it in Scotland), have sex at 16, make their own medical decisions at 16, and make decisions about contraception before that - as soon as medical practitioners deem them 'mature enough to understand their decisions'. Children can work - and pay taxes - from 13 years old.

16 year old members of the Conservative party were able to vote for the party's leader after Teressa May stood down - effectively electing the new Prime Minister.

Children in the UK are locked out of important decisions that effect their lives, and the country (and world) miss out on their valuable, unique perspectives as individuals.

Climate change may not effect many pensioners, but it will effect every child over the next several decades. The UK leaves the EU at the end of 2020 - over 4 years after a referendum that did not include people who are now as old as 22.

Many have argued that political parties are forced to skew their policies toward an older demographic because of voting demography. The fact the government moved to scrap free public transport for children to attend school, rather than means testing the pensioner's bus pass - would seem to bear that out. Further, it is argued that earlier engagement with the political process would lead to more engaged, informed adults - raising the level of debate, and the level of turnout in elections.

Finally and most importantly, children feel disempowered, helpless to change a system they are trapped in, accountable for their actions but not responsible for their day to day lives.

The campaign will be launching in 2021, when we have identified the appropriate policy to define our campaign aims and asks.

In the meantime, we'd love to hear your thoughts! Please get in touch at childrensnetwork@amnesty.org.uk

You can also watch our session on children’s voting rights from our Children’s Rights Festival 2020 on youtube. 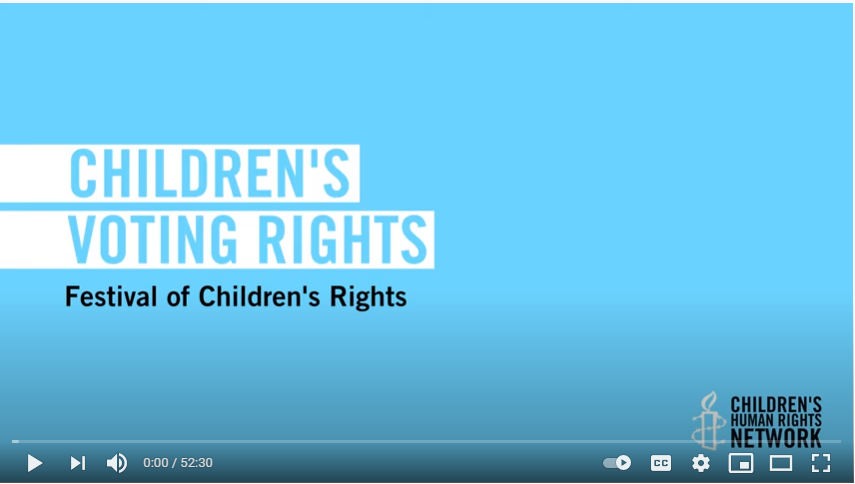