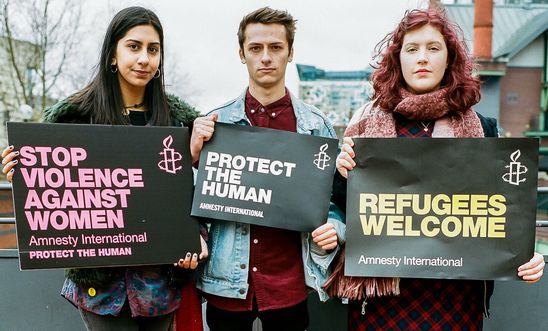 Throughout time there have always been activists out there challenging the status quo, trying to change society by going outside to protest. Whatever stereotype this might conjure up in your mind, there seems to be an overwhelming increase in people - particularly young people - who want to make their voices heard in a different way: Instagram.

The desire for change feels palpable at the moment, and a sense of hopelessness and despondency seems to have kick-started a wave of youth activism. In the 2017 general election an unprecedented 72% of young people (those aged 18-24) voted. For the first time in a while, youngsters are feeling more engaged and involved in the world around them and feel as though they need to speak up.

Here are 10 of our favourite young activists and organisations to inspire you on Instagram in 2018. These individuals or groups are challenging the system in their own way, confronting issues that are important to them and aspiring to change the world for the better.

Tatayana challenges gender-based harassment through her artwork. Street harassment affects many women, often making them feel uncomfortable and even unsafe. Tatayana’s series ‘Stop Telling Women To Smile’ is a collection of portraits, composed with captions, that have been exhibited in outside public spaces in New York, sending a powerful message directly to the offenders that they behaviour will not be tolerated.

Madison became interested in politics aged just 12. Although she wasn’t old enough to vote herself, this wasn’t enough to stop her making her voice heard encouraging others to do so. She is passionate about women’s rights, animal rights and human rights, and although she’s still too young to vote (she’s now 16), with young activists like Madison on the rise, maybe there’s hope for the future!

Mo’ne is a role model for girls and young women everywhere. At 13 years old she became the first African-American female to compete in the Little League Baseball World Series, as well being the first girl to pitch a winning game. In 2015 she launched ‘Because I Am A Girl’ - a global movement for girls’ rights and gender equality. The movement is designed to provide girls with the skills, knowledge, resources and confidence that will help to transform their lives

American writer, actor and comedian Ilana openly stands up for immigrant rights and believes we all have a duty to be supportive to them.

Charlie is a DJ and poet from East London. He is the founder of the successful Run Dem Crew, formed in 2007. Run Dem Crew is a running club, but not just any running club - they are a multifaceted organisation dedicated to changing and empowering the next generation. The RDC work with young people all over London providing mentoring, advice and opportunities for exploring the city in a safe and inclusive environment.

Charlie is also part of the Amnesty Collective: a diverse group of young artists, activists and influencers using their platforms to speak out about issues that are important to them.

The Advocacy Academy is a young social justice fellowship passionate about making a difference to the world. The young and dynamic group work with marginalised communities to develop skills, confidence and knowledge to tackle some of the biggest challenges of the 21st century.

Jaz quit her job working in the fashion industry so that she could go and volunteer full-time in the Calais refugee camp. After returning from her experience she wrote a status on her personal Facebook page, which went viral overnight, having been shared over 65,000 times. Subsequently, Jaz’s brother and her two friends also quit their jobs and joined Jaz in forming The Worldwide Tribe - a fundraising site set up to help provide food, shelter, medical assistance and other care for refugees. Jaz is also part of the Amnesty Collective.

Shon is a writer, artist and comedian based in Bristol. She writes openly about sexuality, feminism, mental health and trans issues and has her own brilliant online series, Shon this Way. She also works for the LGBT charity Stonewall, helping them to engage better with the trans community. Shon is also part of the Amnesty Collective.

Nomad Clan is comprised of two people - Cbloxx and AYLO - who are internationally-acclaimed street art muralists from Manchester. Through their unique and dynamic style the duo are endeavouring to raise awareness of some of the social justice issues of our modern times, such as the lack of affordable housing and jobs, environmental issues and so on. They're also part of the Amnesty Collective.

"We live in the age of the internet, Social media has many positive and negative aspects, but it undeniably plays a crucial role in raising awareness. Its a powerful tool that mobilises/informs the public and more than ever we have the opportunity to come together and speak out about social injustice both online and through direct action."

Last but not least, us! We’ve been campaigning internationally for human rights since 1961. We work to protect women, men and children wherever justice, freedom, truth and dignity are denied. And the only reason we’re able to do all the great work we do, is because of you. Make sure you’re following us in 2018!

It’s been a tough year. But throughout it all, you’ve marched, you’ve protested, you’ve petitioned governments everywhere. And in 2017, that has made a huge difference. Click the link in our bio for some your human rights victories ? . . . #humanrights #amnestyinternational #amnesty #2017 #activism #protest #takeastand #speakout