The way out of the Gangs Matrix crisis 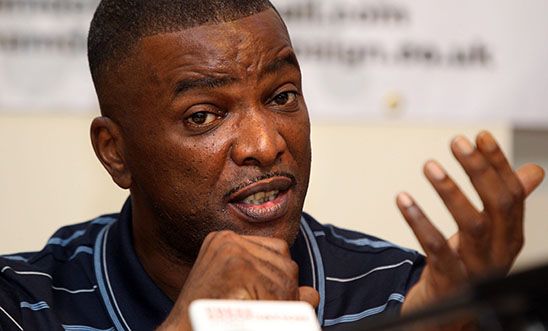 For veteran community campaigner Stafford Scott, our report on the Met’s Gangs Matrix brings a welcome independent overview to a secretive and racialised process – and a chance to change the narrative. He tells how being on the matrix damages the lives of already disadvantaged young blacks.

On the matrix are very young people, adolescents who have been thrown on the scrap heap at an extremely early age. The gang label they are given generally begins in schools. Adolescent misbehaviour is depicted as an indicator of being involved in gangs. Smoking a spliff, for example.

Remember David Cameron announced a war on ‘gang culture’? That narrative, gangs are to blame, has seeped into public sector attitudes. We would have called this ‘black working class youth subculture’.

Before 2004 criminologists and sociologists described adolescent delinquency – the violent skinheads, the punks, the teddy boys, the Hell’s Angels – as working class youth subculture, but of course they were white. When you define it this way, you bring very different interventions than are brought in for young black kids today.

This process is racialised because black children are treated totally differently to their peers or white counterparts.

Once labelled as a gang member, they’re removed from education as quickly as possible and placed in alternative provision: often pupil referral units, a dumping ground for black kids. These are the children of the already marginalised. They’re like the Windrush children. They are easy targets for playing politics, for grandstanding to wider society.

Given the gang label, all services are withdrawn from them and their families. It is this that creates an anger that allows young people to be so violent to each other. Institutions that are there to support society are labelling them, stereotyping them, ostracising them, pushing them down. In their homes, they have hard times.

Where a person identified as being in a gang has younger siblings, the local authority will tell the mother she cannot move – but at the same time threaten her with eviction because of her son’s alleged gang involvement.

Most of this is done without any evidence to prove that the young person is in a gang or has carried out any kind of violent crime.

The personal impact of being labelled a gang member is totally, totally disabling. It goes right across the system. It can start in the careers office. There are gang workers in all of the benefit offices in the 32 ‘priority boroughs’, so even there people can be identified as being in gangs and sanctioned from benefits, so their benefits are cut.

The only thing the state does offer once they label you as a gang member is the opportunity to go on a gang exit programme. But if you do not think you are in a gang, you’re not likely to accept. And most programmes don’t allow young people to exit the areas they live in. Instead they ask them to stay and give information on their friends.

Many ‘disruption tactics’ are used against people on the matrix. The most recent was getting the DVLA to write to young black boys in Tottenham and Wood Green who are on the Matrix, saying police have informed them that they are unfit to drive and must give up their licences. After three months, most of them had their licences returned, showing there was no justification for doing it.

This is what fuels anger. These young people have desperate, bleak lives, they have no futures. Trident officers have been known to tell employers that the person they employ is a member of a gang, and the employers get rid of them. It’s creating a hostile environment for young black kids, just as they’re creating a hostile environment for older, West Indian Windrush children.

The worst aspect of the Matrix approach is the sharing of information right across the piece, information that has no evidence base whatsoever. That sharing stigmatises and becomes the label, and once labelled that is effectively the end of that young person’s productivity in this society. They have no value again until they end up in the prison system.

Nobody is on these young people’s side. Nobody advocates on their behalf. The entire system becomes infected with a mindset that sees us as a suspect community, pushes these kids downstream.

Had we identified this as working class black youth subculture a long time ago, it would have instantly brought in different interventions that we would have engaged. To describe them as subculture, means they are part of our culture, just a different strain. So we would have worked to overcome marginalisation, to build skills, to build capacity, to give them opportunity.

These kids are suffering from poverty, financial poverty, poverty of aspiration, poverty of hope. We need to give them a different perspective of the world.

What we can’t do is create a crisis and then think we are going to police ourselves out of it. At the moment even more policing is being pushed in, but it is clear that government cannot police its way out of this crisis it has helped to create.

There is no relationship with local communities. It’s worse now than at any time I ever knew. There is no meaningful engagement – across the country, local authorities, especially in a time of austerity, have stopped engaging because they have nothing to offer us.

Going forward it is hard to see better engagement between police and communities as we are not allowed in the places and spaces that decisions are being made. There is no understanding of institutional racism and how it manifests itself in public offices. And going forward, our communities have to say: ‘Nothing about us without us’. We have to beat the decision making tables.

What must happen next is the databases must go. It’s not just the Matrix, there are similar databases in Manchester, Liverpool, Birmingham and Nottingham. They have to go, but also these units that appear to be there just to police certain parts of society. That where the racial profiling and stereotyping is entrenched, all of that has to go. We want to see the police service opened up so that it can, if it’s at all possible, be properly held to account.

This is not just about policing. This is about an Equality and Human Rights Commission that is totally irrelevant to black people, that since its inception has never had a standing committee on race. Yet, all equalities legislation in this country is built on the back of race equality legislation.