Following his arrest on 1 February, researcher and master’s student Ahmed Samir Santawy was subjected to enforced disappearance for five days. During this time, security forces beat him and kept him blindfolded, while interrogating him about his social media engagement and academic research. On 6 February, the Supreme State Security Prosecution ordered his detention pending investigations into terrorism-related charges. He has been denied contact with his family, raising concerns about his wellbeing and health amid COVID-19 outbreaks in Egypt’s overcrowded and unhygienic prisons. He must be immediately and unconditionally released. 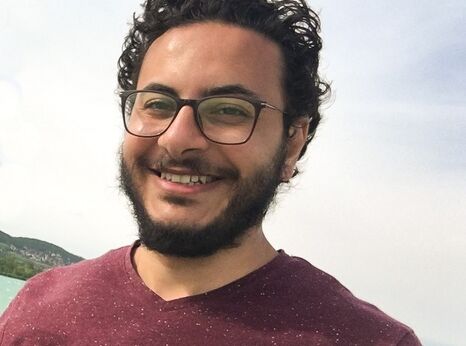 Following his arrest on 1 February, researcher and master’s student Ahmed Samir Santawy was subjected to enforced disappearance for five days. During this time, security forces beat him and kept him blindfolded, while interrogating him about his social media engagement and academic research. On 6 February, the Supreme State Security Prosecution ordered his detention pending investigations into terrorism-related charges. He has been denied contact with his family, raising concerns about his wellbeing and health amid COVID-19 outbreaks in Egypt’s overcrowded and unhygienic prisons. He must be immediately and unconditionally released.

Ahmed Samir Santawy is a researcher and student of anthropology at the Central European University (CEU) in Vienna, Austria. His research focuses on women's rights, including the history of reproductive rights in Egypt. Since Ahmed Samir Santawy started studying at CEU in September 2019, initially in Budapest, Hungary, Egyptian security officers have questioned him each time on arrival at and departure from the Cairo International Airport about the reasons for his trips abroad and the nature of his studies. He was questioned during his last entry into Egypt in mid-December 2020.

According to a complaint submitted by Ahmed Samir Santawy's family to the Public Prosecutor, and reviewed by Amnesty International, as well as information collected from other informed sources, on 23 January, seven masked and armed policemen raided Ahmed Samir Santawy's family home, when he was not there. They did not present an arrest or search warrant, confiscated a digital recorder from the house's CCTV cameras, and instructed for Ahmed Samir Santawy to present himself to the National Security Agency (NSA), without providing any reasons. When he went to the NSA office at a police station in New Cairo on 30 January, he was told to return on another day. He did as instructed on 1 February and was arrested. On 3 February, he was transferred to another police station in New Cairo. On 4 February, security forces moved him to an unknown detention location, where he was held before appearing at the SSSP offices on 6 February. Since he handed himself over on 1 February until his interrogation by the SSSP, authorities refused to reveal information about his exact fate and whereabouts to his family and lawyers.
The SSSP prosecutor questioned Ahmed Samir Santawy about his studies and academic background, including his research findings in relation to Islam and abortion. The prosecutor also explicitly asked him about what questions NSA officers directed at him during their interrogations. Ahmed Samir Santawy said that NSA officers questioned him about his studies as well as his alleged involvement in a Facebook page titled, "25 January Revolutionaries", critical of the authorities’ human rights record, which he denied. The prosecutor also asked him about a Facebook post regarding a detained journalist being subjected to beatings, but Ahmed Samir Santawy denied being the owner of the account. His lawyers’ request to refer him to the Forensic Medical Authority for examination of the injuries sustained during his detention by the NSA was not granted.

Authorities flouted the limited guarantees stipulated in Egyptian law, as well as their obligations under international law. Article 54 of the Egyptian Constitution states that: “Every person whose freedom is restricted shall be immediately notified of the reasons … shall be immediately enabled to contact his/her relatives and lawyer; and shall be brought before the investigation authority within 24 hours as of the time of restricting his/her freedom". Although article 40 of Law No.94/2015 on counter-terrorism allows the prosecution or another “investigative authority” to order the detention of suspects in terrorism cases for up to 14 days, renewable once, without being questioned by a prosecutor or judge, suspects have the right to be informed of the reasons for their arrest and to contact their families and lawyers (article 41). Further, the law stipulates for suspects to be held in official places of detention.

Under articles 9 and 14 of the International Covenant on Civil and Political Rights (ICCPR), to which Egypt is a state party, no one shall be arbitrarily detained; everyone arrested has the right to be informed of the reasons of their arrest and must be brought in front of a judge promptly and be allowed to challenge the legality of their detention. The UN Working Group on Arbitrary Detention has found that detention can be arbitrary even when allowed by domestic law if it contravenes international standards or is incompatible with other human rights such as the rights to freedom of expression, assembly or belief. The prohibition of torture and other ill-treatment is absolute under the ICCPR and the Convention against Torture and other Cruel, Inhuman or Degrading Treatment or Punishment, to which Egypt is also a state party.

In the recent years, thousands of real or perceived political opponents have been arrested and kept in prolonged pre-trial detention by orders of the SSSP pending investigations into unfounded terrorism-related and other charges, sometimes for periods exceeding the absolute legal maximum limit of two years for pre-trial detention. Those targeted include human rights defenders, activists, lawyers, politicians, protesters, journalists, medical workers and academics. Proceedings against them are generally based on secret police investigations, inaccessible to defendants and their lawyers, and sometimes supported by social media posts deemed to be critical of the authorities. In February 2020, security forces arrested Patrick Zaki George, a gender researcher and master's student in Bologna, Italy, upon his arrival to Cairo International Airport. He remains detained pending investigations by the SSSP over similar terrorism-related charges.