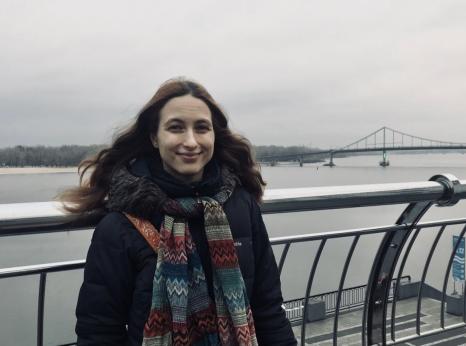 Aleksandra Skochilenko is a songwriter and artist from St. Petersburg. She is accused of replacing price tags in local supermarkets with anti-war information, including about those killed during the shelling of the Mariupol Drama Theatre.

On 11 April, police searched Aleksandra Skochilenko’s home, arrested and interrogated her until 3am the next morning. On 13 April, the Vasileostrovsky District Court placed her in pre-trial detention until 1 June 2022 (the term is likely to be extended).

Aleksandra Skochilenko is accused of “public dissemination of deliberately false information about the use of the Armed Forces of the Russian Federation, the exercise by state bodies of the Russian Federation of their powers” under recently added Article 207.3 (2) of the Criminal Code. She faces 5 to 10 years in prison if convicted.
Aleksandra Skochilenko is well-known in the art community: she writes songs, creates comic books and cartoons, organizes concerts and jam sessions. She also wrote the famous “Book About Depression” which helped many people and contributed to destigmatizing mental illnesses. The book has become extremely popular. It has been reprinted several times and translated into various languages. It also has inspired many videos and exhibitions.
Aleksandra Skochilenko suffers from celiac disease and requires a special gluten-free diet. On 20 April it was reported that her health had deteriorated due to lack of access to adequate food. On 21 April her lawyer informed Amnesty International that the detention centre finally allowed a food parcel from her family more suitable for her.

On 25 April one of Aleksandra Skochilenko’s lawyers visited her in the pre-trial detention centre and reported that her health condition was getting worse, as she was not being able to eat as she is not provided with the diet she requires, and she has not been allowed food provided by her family either. She feels weak much of the time. She is also being subjected to psychological pressure from detention centre guards and her cellmates, and she has to cope with unsanitary conditions and cold in her cell.

On 7 May, after the above information was shared with the media, Aleksandra’s conditions in detention were improved. She is provided with gluten-free food at least once a day. However, she is unable to have either breakfast or dinner. On the day of her last trial she was unable to eat anything all day. Aleksandra lost a lot of weight while in detention which creates risks for a person with her disease.

In addition to that, the investigation made her partner a witness in her criminal trial. That means that they cannot see each other. Her partner made a few claims but the investigator declined all of them.