The truth about… refugees 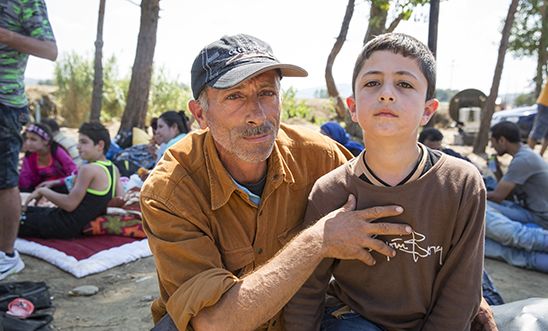 A Syrian man waits with his family of five at the Macedonia border, 24 August 2015. © Richard Burton

Europe’s refugee crisis is getting worse, and if you listen to government ministers and many other political commentators, constitutes a dire threat.

In reality, the countries most affected by this increase in refugees are thousands of miles away; and the impact on Europe constitutes only a fraction of a refugee crisis arising from conflicts that have grown and spread across the Near and Middle East, and sub-Saharan Africa.

Here are six truths about refugees and the people coming to Europe, seeking our help.

1. Most people making journeys across the Mediterranean, and most of those gathered at Calais, are refugees

Ministers repeatedly deny this, but the evidence is clear. The EU external border control agency, FRONTEX, say that the large majority of the people come from Syria, Eritrea, Sudan, Afghanistan and Iraq. Of these, by far the largest group are Syrians.

The number of new refugees and the total global refugee population have risen substantially – first in 2013, and then by nearly 3 million in 2014. This rise is unprecedented, at least since the Second World War.

2. These are people fleeing persecution and terror

A refugee is someone who is at serious risk of persecution in their home country. They are at risk of such things as bombardment and violence from all sides in Syria, which has included barrel bombing and gas attacks; or torture, repression and enslavement by their own government in Eritrea.

This is not about economic betterment; it is fundamentally about life and liberty – which is why so many men, women and children risk their lives trying to get to safety in Europe.

Laith Majid & his family paid more than $8000 in the hope of receiving sanctuary from Syria http://t.co/kczNsV55k6 pic.twitter.com/dpMbrvQPbV

3. There are no safe and lawful routes available for these people

To claim asylum in Europe, refugees have to get here first. To travel by ordinary lawful routes, these people are required to obtain visas. And there are no visas available for those who are seeking asylum.

A tiny number of refugees are permitted to resettle from unsafe and unsustainable conditions in countries neighbouring their own – such as refugee camps in Jordan and other precarious situations in Lebanon.

Since January 2014 the UK has resettled just 18,252 Syrian refugees through this system – a pitifully small proportion of the near 4 million Syrians in Turkey, Lebanon and Jordan. To put that into perspective, the Calais ‘jungle' hosts around 3,000 people.

With the rise in the global refugee population, conditions in poorer countries hosting many more refugees than Europe is receiving are often inadequate, devoid of hope and dangerous. Some feel they’ve no choice but to move on. For them, people smugglers and perilous boat journeys are the only choice left.

4. There is no legal requirement for a refugee to claim asylum in any particular country

Neither the 1951 Refugee Convention nor EU law requires a refugee to claim asylum in one country rather than another.

There is no rule requiring refugees to claim in the first safe country in which they arrive.

The EU does run a system – called the Dublin Regulations – which allows one EU country to require another to accept responsibility for an asylum claim where certain conditions apply.

The relevant conditions include that the person is shown to have previously entered that other EU country or made a claim there. This is supposed to share responsibility for asylum claims more equitably among EU countries and discourage people moving on from one EU country to another. But it doesn’t work.

It is clear the system greatly benefits countries like the UK and is very unfair to countries like Greece and Italy. That’s part of the reason Germany has just suspended the Dublin Regulations when dealing with people fleeing from Syria.

5. The UK is not disproportionately affected by the global refugee crisis, and neither is Europe

By the end of 2014, the global refugee population stood at 14.4 million people – if you discount the 5.1 million Palestinian refugees, who are generally left out of such figures because they are not within the remit of UNHCR, but rather a separate UN agency (the UN Relief and Works Agency).

Countries like Turkey and Pakistan host more refugees than all EU countries combined. Except for Turkey, no European country appeared among the top ten hosts of refugees at the end of 2014. Ethiopia, Kenya, Chad and Uganda were all on that list.

Within the EU, Sweden and Germany have consistently led the combined EU effort in receiving asylum claims and providing protection. France lags behind but for years has still received more than twice the number of asylum claims received by the UK.

Now Italy, Greece, Bulgaria and Hungary are among those far more affected than the UK.

6. The UK asylum system is no more generous than many others

Asylum-seekers in the UK can qualify for accommodation and financial support while waiting for their claims to be finally decided. This is the same in other EU countries.

In the UK, the weekly allowance for a single adult asylum-seeker is £36.95 per week, lower than many other EU countries. The equivalent weekly rate in France, for example, is £58.50 (on an exchange rate of 73p to the euro).

Elsewhere in the EU, asylum-seekers must be permitted to work if their claims have not been decided within 9 months, although some countries permit this after less time. This does not apply in the UK, where permission to work will not be granted unless 12 months have past and the claim remains undecided. The UK has introduced severe restrictions on what work an asylum-seeker may be permitted to do even if this condition is met.

Detention is used much more extensively in the UK’s asylum system than in other EU countries. Those countries also have time limits on how long a person may be detained under immigration powers, whereas the UK has no time limit.

Research tends to show that asylum-seekers know little of the asylum system in any individual country, including the UK, before arriving there.

When asylum-seekers do decide they would prefer to reach a particular country to make an asylum claim, family, community and language connections tend to be key factors in making that decision.

Of course we’re all free to believe the opposite to these truths if we’re so inclined. But doing so won’t help us face up to the current global refugee crisis and it won’t make it go away either.