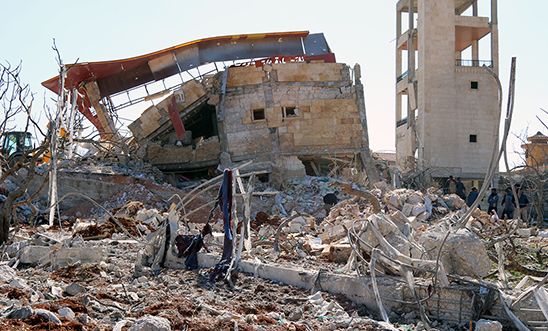 Russian and Syrian government forces are deliberately targeting hospital after hospital to pave the way for ground forces to advance on northern Aleppo, according to our latest investigations.

Even as Syria’s current fragile ceasefire deal was being hammered out, Syrian state forces and their allies intensified their attacks on medical facilities.

No government should prevent people from accessing medical care.

We've found at least six deliberate attacks on hospitals and clinics, killing three civilians including a medical worker, in the northern part of the Aleppo countryside in the past 12 weeks.

This latest string of brutal attacks show a pattern of targeting health facilities – a strategy that has killed hundreds of doctors and nurses since the start of the conflict and amounts to war crimes. By destroying these vital services, civilians living in these areas are left with little choice but to flee.

'Hospitals, water and electricity are always the first to be attacked. Once that happens people no longer have services to survive. This is what happened in Anadan. By mid-February most of the residents had fled the city after the field hospital and medical centre were attacked on 2 February.

'The field hospital is barely operating and the centre closed. The problem is that not everyone is able to leave. The ones who stayed behind are elderly people who are in desperate need of medical treatment.'

A doctor from Anadan, Syria

Baghdad Hospital in Hreitan was directly targeted on 25 December and severely damaged. A doctor and another medical worker at the hospital told us that a Russian or Syrian warplane fired missiles directly at the hospital, injuring ten medical staff and at least 20 civilian patients, leaving the facility in ruins. Medical worker Ali Hamedo was killed by the strike.

The hospital has been unable to function since.

'Not even underground hospitals are safe. We moved the hospital underground a year ago assuming that it will be protected from the airstrikes. But the missiles were able to penetrate the underground levels. We have spent hundreds of thousands of dollars to equip the hospital and provide treatment to the injured and sick but now Hreitan has no more hospitals.'

The laws of war

Under the laws of war, hospitals and medical units enjoy special protection. They only lose their protection from attacks if they are being used outside their humanitarian function to commit 'acts harmful to the enemy' such as to store weapons.

Even if this was the case, a warning has to be issued setting a reasonable time limit and an attack can only take place after such a warning has remained unheeded.

In all the cases we investigated, there is no evidence military vehicles, checkpoints, fighters or front lines near the hospitals that were attacked. According to every eyewitness, the hospitals were exclusively serving their humanitarian function.