South Sudan: Suffocation of more than 60 men and boys in a shipping container is a war crime 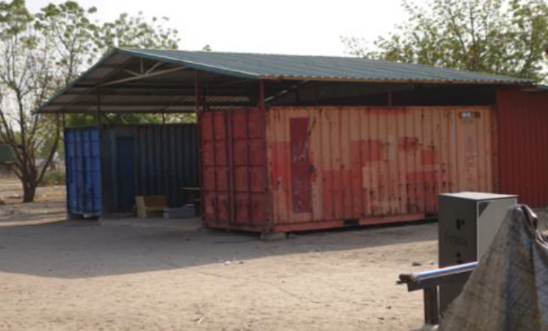 'We could see the people inside and they were not alive… what we saw was tragic…the container was full of people. They had fallen over one another and on to the floor. There were so many people.'

Nyakume’s relative had been arrested the day before in Leer.  She travelled early the next morning to the detention site the next day to bring her relative food.  She told us 'When I got there I saw that one after another, they were dead… They had let me into the compound and I was just in front of the door of the container. There were other people standing there too, many women and the soldiers.'

Family members of the dead told us their loved ones were arrested for no apparent reason by government forces and then detained.  Approximately 60 men and boys were arrested in Luale village and Leer town.  They were then forced with their hands tied behind their backs, into one or more shipping containers at the Comboni Catholic Church.  According to witnesses the arrests happened between 20 and 23 October 2015.  Our investigation found those taken were cattle keepers, traders and students – not opposition fighters.

Witnesses also told our research team they heard detainees crying and screaming in distress and banging on the walls of the shipping container, which had no windows or other form of ventilation.  One woman told us she witnessed the then area commander order soldiers to open the container and remove the bodies of four dead men and close the container again on the remaining detainees who at that point were still alive.

By the following morning, all but one of the remaining detainees was still alive.

'When they [Nuer soldiers] opened the door the child fell down and was crying, that’s how we knew he was alive.  They poured water on him and gave him water to drink' said Nyaweregak, a relative of one of the detainees who had died. Following the deaths, government soldiers loaded dozens of bodies into a truck and dumped them in two open pits in Kulier, Joung Payam, approximately 1 km north of Leer town.  Family members who visited the area in the following days also told our researchers that the bodies were left in the open, had been eaten by animals and were decomposing. Our researchers visited Kulier in Joung payam and we observed human remains at the site.  Remains were scattered outside the pits identified by witnesses, very likely having been dragged there by scavenging animals.  We commissioned forensic analysis on photos of the remains and the analysis is consistent with witness statements regarding the time of death and decay and the evidence of scavenging.

Despite evidence of war crimes, no steps have been taken to hold the offenders to account or to provide reparations, including compensation to relatives of the deceased for the loss of their loved ones.

'The arbitrary arrest, torture, and mass killings of these detainees is just one illustration of the South Sudanese government’s absolute disregard for the laws of war.  Unlawful killings must be investigated and all those responsible brought to justice in fair trails without recourse to the death penalty.

'In order for effective prosecutions to take place, the African Union Commission should immediately take steps to set up the hybrid criminal court provided for in the August 2015 peace agreement, and ensure that it immediately opens investigations into crimes under international law, including into this atrocity.' On 15 December 2013, a political dispute within South Sudan’s ruling party, the Sudan People’s Liberation Movement (SPLM), escalated into an armed confrontation in Juba between forces loyal to President Kiir and those loyal to former Vice-President Riek Machar. By the end of 2013, violence had spread to Jonglei, Unity and Upper Nile States.

In August 2015, after more than 20 months of intermittent negotiations, South Sudan’s warring parties finally agreed to the terms of a peace agreement. The agreement provided a framework for parties to end hostilities and addressed a wide range of issues including: power sharing, security arrangements, humanitarian assistance, economic arrangements, justice and reconciliation, and for a process to develop a permanent constitution.

The peace agreement also provides for the establishment of a Hybrid Court for South Sudan by the African Union Commission, with a mandate to investigate and prosecute genocide, war crimes and crimes against humanity committed during the conflict. This court has not yet been established.

Despite the peace agreement and commitments by parties to the conflict to a permanent ceasefire, fighting continued in Unity state through mid-December 2015. The power-sharing government has not yet been formed.

At the time killings took place, the Comboni Catholic Church compound had been taken over by government forces.  Relatives of the dead told us that the victims were cattle keepers, traders and students - not fighters.

We are now urging a prompt and independent investigation into the killings and for the perpetrators to be brought to justice through fair trials not subject to the death penalty.