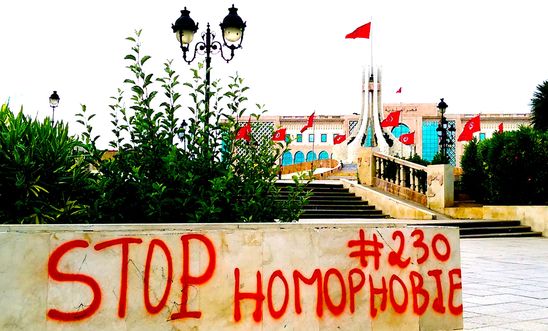 Six university students in Tunisia have been freed following an international campaign for their charges and punishments for the (non-existent) ‘crime’ of sodomy to be dropped.

They’d each been facing three years in prison since December 2015, when after a court found them ‘guilty’ of homosexual relations.

Arrested at a party

Calling the police on your student neighbours because they’re having a party. We might associate such a complaint with an antisocial issue – noise, perhaps. For six male students in the city of Kairouan in Tunisia, it was much more serious than that.

They were at a house party on 2 December when police arrived to arrest them on allegations of ‘sodomy’. Being gay is illegal in Tunisia – punishable by a maximum of three years in prison.

The men were taken to a police station where some of them say they were beaten. A lawyer representing one of the men said that he had seen signs of violence, and that one student had had his nose broken.

Each young man was charged with ‘sodomy’.

Each man refused; one by one, they signed refusal forms. Yet the form had no power – the men were taken from the room and beaten by police officers, who forced to go back into the room and ‘consent’ to the probe. Their refusal forms were torn up, and they were made to sign an agreement form against their will.

Sentenced to three years in prison for being gay

The day after they were arrested and examined against their will, it got worse: they were put on trial for allegations of homosexual relations.

A week later, on 10 December 2015, they were each sentenced to three years in prison simply for being gay. Three years is the maximum punishment people convicted of ‘sodomy and lesbianism’ under Article 230 of the Tunisian Penal Code.

They were also banned from the city of Kairouan for five years after release, under Articles 5 and 22 of the Penal Code.

Fearing for their lives

The men were released on bail on 7 January, after spending nearly a month in prison, but the damage was done. They were marked as criminals. Their lawyer told us that the students had been threatened since they’d returned from their trial, and were then too afraid to go outside. They were living in constant fear of violence – and new accusations against them.

Campaign for their freedom

We published an urgent action following the men’s arrest, which mobilised activists around the world to call on the Tunisian authorities to drop the charges against the men and take steps to do away with the backwards and discriminatory practice of jailing people for their sexuality.

Just weeks earlier, people in Tunisia and around the world had similarly campaigned for a student, ‘Marwan’, to be released from prison for the same charge of ‘sodomy’ – and the same brutal treatment in custody. Pressure from within Tunisia and from international campaigns appears to have helped set Marwan free – and it appears to have contributed to the early release of these six students too.

The men’s case went to appeal on 3 March, where a judge ruled that their three-year sentences should be reduced to just one month in prison, which they had already served, along with a fine of 400 Dinar (around £138). Their ban from the city in which they were studying in was overturned.

While the young men may no longer be physically imprisoned for allegations about their sexuality, they now have to live in fear of discrimination and possibly further recrimination, if they are suspected of engaging in same-sex relations in future.

We are campaigning for Tunisia to quash the convictions of the students and all people convicted of ‘sodomy’ under Article 230. We’re also calling on Tunisian authorities to abolish the discriminatory and rights-denying law altogether. Until this happens, people who don’t seem to fit into specified sexual and gender norms will continue to be imprisoned and punished simply for being who they are.