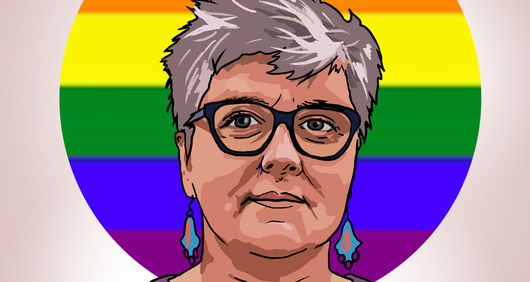 Human rights defender Elżbieta Podleśna had just returned from a trip to Belgium and the Netherlands with Amnesty International, when her home was raided by the police at 6am on 6 May.

It remains unclear why it was necessary to investigate Elżbieta Podleśna or why the prosecutor’s office authorised the raid instead of just summoning her to the police station to testify. Elżbieta Podleśna was arrested by the police and taken into detention for several hours. The police also confiscated her electronic equipment, including her laptop, phone and memory cards.

Elżbieta Podleśna is suspected of "offending religious beliefs", after the police claimed that they found copies of a posters depicting the Virgin Mary with a halo around head and shoulders in the colours of the LGBTI flag, when they raided her home. Under EU law Poland is obligated to respect, protect and promote the right to freedom of expression.

This case should be seen in the broader context of harassment of activists and human rights defenders in Poland.

Please write using your own words or the template letter provided in the attached documents, in Polish, English or in your own language, to the listed address as soon as possible: