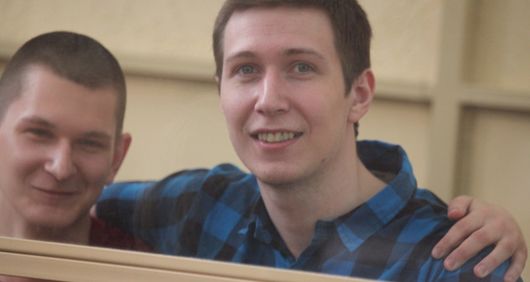 On 10 December, a court of appeal upheld the convictions of human rights defenders from Rostov-on-Don, Yan Sidorov and Vladislav Mordasov, confirming their sentence to over six years in prison each. They are prisoners of conscience and must be released immediately and unconditionally. The conviction should be quashed, and their allegations of torture and other ill-treatment effectively investigated.

On 10 December, the Third Court of Appeal at a hearing in Rostov-on-Don, southwestern Russia, upheld the conviction of human rights defenders Yan Sidorov and Vladislav Mordasov for “attempted organisation of mass disturbances”. On 4 October, the court of first instance sentenced them, respectively, to six years and seven months and six years and six months in a strict regime penal colony.

Yan Sidorov and Vladislav Mordasov were prosecuted for trying to stage a peaceful protest in central Rostov-on-Don on 5 November 2017, in support of local residents who had lost their homes when a suspiciously extensive fire swept through a prime city location in August of that year. At the time, Yan Sidorov was just 18, and Vladislav Mordasov was 21. Amnesty International considers both to be prisoners of conscience.

Despite the apparent trumped-up nature of the charges against the defendants, the court of appeal swiftly dismissed their objections. The judges spent less than an hour deliberating before upholding the initial conviction and sentence. Yan Sidorov’s lawyer stated they will explore every available avenue for further appeal and review of the decision, including lodging a complaint before the European Court of Human Rights. The time Yan Sidorov and Vlad Mordasov have spent in pre-trial detention since 5 November 2017 will be counted as time served.

Amnesty International will continue campaigning in support of Yan Sidorov and Vlad Mordasov and demand their immediate and unconditional release. Their conviction should be overturned, as they are prisoners of conscience imprisoned solely for exercising their right to peaceful assembly.