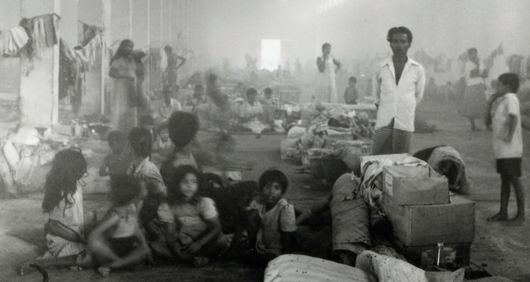 A Pakistani Catholic family, who arrived in Colombo, the capital of Sri Lanka, seeking asylum in July 2013, when their lives were threatened, quietly returned to Pakistan in September. Arrested after overstaying their visa, members of the John family were being detained in deplorable conditions when Amnesty International learned that there were plans to deport them immediately from Sri Lanka on 31 May 2019. After the Easter Sunday attacks in April 2019, violent mobs displaced them, along with other families seeking asylum, from their home. While their deportation was successfully halted, Sri Lankan authorities did not offer them a safe alternative and the family was forced to return back to Pakistan, as they could no longer live in the detention camp.

Naseem John, Nida John, Nobil Zain, Sylvester John, Hina Milword and Keshwan Milword – whose ages range from 11 to 57 – were forced to seek sanctuary in Sri Lanka after fleeing serious threats to their lives in Pakistan. The entire family were arrested in May 2019 for overstaying their visas and detained in deplorable conditions, while awaiting plans for their immediate deportation.

Following global attention on the John family’s case, the Sri Lankan Foreign Office halted their plans to deport them. However, with no improvements to their living conditions, no legal recourse for their asylum application status, and the concerning deterioration of health for the oldest member of their family – who was left unable to access the medical services needed – the family decided to voluntarily return to Pakistan.

In the temporary shelters where the John family sought safety, they lived in overcrowded and unsanitary conditions without reliable access to basic services. They slept on the hard floor, with a thin plastic sheet or bedsheet under them, and no space to even turn. Those who were out in the open slept on wooden pallets to escape rainwater.

People began suffering from fever, infections, respiratory illnesses, diarrhea, and, especially among older people, high blood pressure. There were no adequate health facilities nearby, and the refugees and asylum-seekers could not venture out by themselves. Keshwan, the youngest member of the John family was kept isolated from his mother, Hina.