Drop charges against students and academic 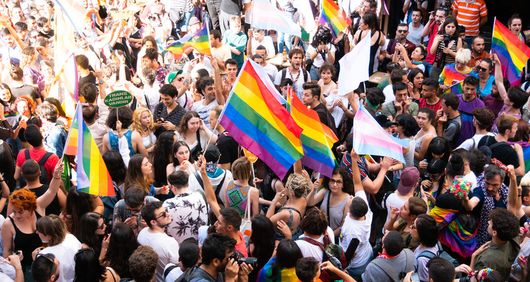 Eighteen students and one academic from Middle East Technical University (METU) in Ankara are facing criminal charges for allegedly joining an LGBTI Pride Parade on the University’s campus on 10 May. The trial begins on 12 November. Some of them have stated that they did not participate in the parade and were just bystanders. No one should be prosecuted for exercising their rights to freedom of expression and peaceful assembly. The charges against them must be dropped.

Why are 18 students and one academic facing criminal charges?

During the 9th annual LGBTI+ Pride Parade at Middle East Technical University (METU) in Ankara, 18 students and one academic were arrested in connection to their alleged participation in the campus Pride Parade on 10 May 2019. Their trial is set to begin on 12 November 2019.

In their indictment, the peaceful pride celebration was described as an “unlawful assembly”, and all 19 were accused of “failing to disperse despite being warned”. One of the students is also charged with “insult”, for allegedly “making a hand gesture considered rude” to the police officers.

On 6 May 2019, METU rector, Mustafa Versan Kok, wrote to students and staff that the parade would not be allowed, because of the blanket ban imposed by the Ankara government on all LGBTI events in the city. This decision constitutes a restriction on the rights to freedom of expression and peaceful assembly of the students and academics of METU.

Police officers were called to the METU campus during the Pride Parade by university management, to disperse the students who had peacefully gathered to celebrate Pride. When students did not disperse, police officers broke up their gathering with pepper spray, plastic bullets and tear gas. Several people were injured and at least 22 were detained, among them were the 19 currently facing criminal charges.

On 18 November 2017 the Ankara government indefinitely banned all public events in the capital city, making use of it’s expanded powers under the State of Emergency that was in place at the time in Turkey. The government based its decision on vague grounds, including the risk that public events may cause “hostility” or “draw a negative reaction from certain parts of society, due to certain social sensitivities”. When the State of Emergency was ended in July 2018 a similar ban was put in place by the Ankara government on 3 October 2018.

Ankara based LGBTI+ groups, Kaos GL Association and Pink Life, separately filed a legal challenge against the indefinite blanket ban, as a violation of freedom of expression and freedom of assembly and association. The ban was lifted by a regional court decision on 19 April 2019, which found the ban to be unconstitutional, even under State of Emergency law.

Please write using your own words or the template letter provided in the attached documents, in Turkish, English, or your own language, to the listed address as soon as possible: