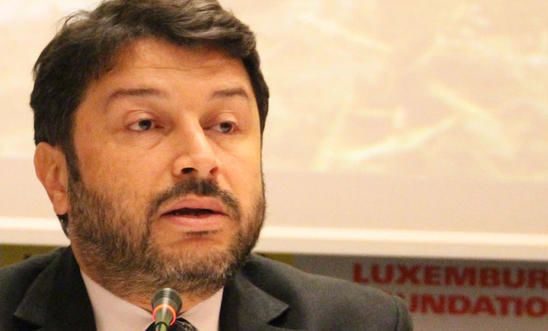 Taner Kılıç, Amnesty Turkey's Chair, has already been behind bars for more than a year © Amnesty International

‘It is impossible after a hearing like today’ - Kate Allen

“Today’s heart-breaking decision to keep our colleague in jail is yet another travesty of justice.

“After more than a year away from his family, and without a shred of credible evidence presented to substantiate the absurd charges made against him, his cruel and protracted incarceration defies all logic.

“Earlier this month, any fig leaf of legitimacy for the prosecutor’s case was stripped away with the submission of the long-delayed police report. By failing to find any evidence that Taner ever had the ByLock messaging app on his phone, the report removed the central accusation against him. A second police report submitted to the court this morning, confirmed that there was no trace of Bylock on Taner’s phone.

“This should have led to his immediate and unconditional release. But rather than celebrate their long-awaited happy reunion, his wife and daughters had to endure Taner being led away, back to the overcrowded cell where he has spent more than a year of his life.

“Taner’s situation is emblematic of what is happening in Turkey today. Many of the country’s human rights defenders are either languishing in jail or living in constant fear of arrest. We will continue to fight tirelessly on behalf of Taner, the Istanbul 10 and all those unjustly jailed under Turkey’s ongoing crackdown.”

The next hearing in Mr Kılıç’s case is now scheduled for 7 November.

This morning a second police report was submitted to the Çağlayan courthouse in Istanbul, having been requested by the court to clarify why there had been no finding about the presence of the ByLock messaging application on Kılıç’s phone. This second report confirmed the findings of the first report and that of four independent forensic analyses, which found no trace of ByLock on the phone.

Amnesty UK Director Kate Allen, who attended today’s hearing in Istanbul, called the decision “unconscionable” and “impossible” in light of the ByLock revelations.

Amnesty supporters continue to call on the Turkish authorities to release Taner Kılıç immediately and unconditionally.

Amnesty has recently reported on how a wide crackdown in Turkey has created a “suffocating climate of fear” across the country, with more than 100,000 people currently facing criminal investigations while more than 107,000 public sector employees have been arbitrarily dismissed. Meanwhile, more than 1,300 NGOs have been permanently closed down for unspecified links to “terrorist” organisations and more than 120 journalists have been jailed in the last two years.