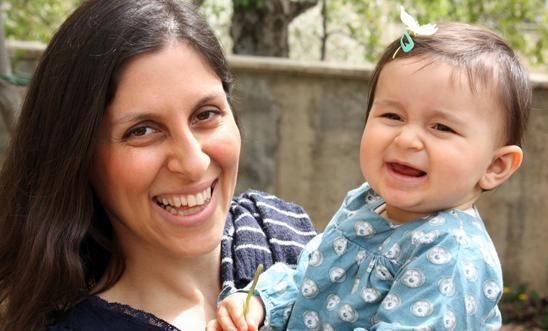 ‘It’s shocking that it’s come to this’ - Kate Allen

Responding to news that the jailed UK charity worker Nazanin Zaghari-Ratcliffe has started a hunger strike in protest at her continued imprisonment in Iran - while her husband Richard Ratcliffe has also gone on hunger strike outside the Iranian Embassy in London - Kate Allen, Amnesty International UK’s Director, said:

“This is a truly heartbreaking situation.

“Nazanin has already been through so much, while her husband Richard has strained every sinew to get Nazanin out of jail and back to the UK where she belongs.

“Nazanin is a prisoner of conscience, unfairly jailed after a sham trial and subjected to all manner of torments - including months in solitary conferment and endless game-playing over whether she would receive vital medical care.

“It’s shocking that it’s come to this, and we and countless people across the county fervently hope the Iranian authorities will now finally do the right thing and release Nazanin.

“I’ll be visiting Richard outside the Iranian Embassy, and I know some of his many supporters will be doing the same.”

Amnesty’s campaign for Zaghari-Ratcliffe’s release has been supported by almost 200,000 people, and a number of Amnesty supporters are expected to visit Richard Ratcliffe outside the Iranian Embassy in central London in the coming days as he embarks on a solidarity protest on behalf of his wife.

Mr Ratcliffe has announced that he will maintain a 24-hour vigil outside the embassy in Knightsbridge, camping out overnight.

Earlier this week (11 June), the couple’s daughter Gabriella had her fifth birthday and Richard Ratcliffe will hold a candle-lit event (at approximately 8.30pm) marking this milestone outside the embassy on Sunday.