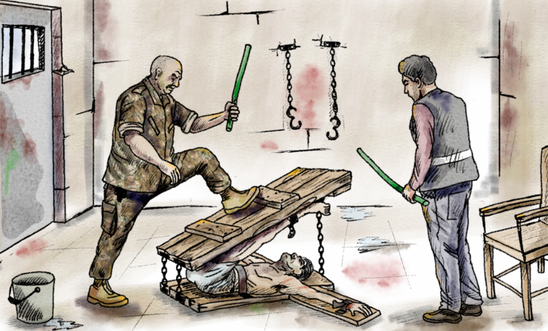 ‘This report offers a snapshot of the Lebanese authorities’ cruel, abusive and discriminatory treatment of Syrian refugees’ - Marie Forestier

Amnesty’s 52-page report - ‘I wish I would die’: Syrian refugees detained on terrorism-related charges and tortured in Lebanon - shows how Lebanese interrogators have employed some of the same torture techniques routinely used in Syria’s most notorious jails.

The torture - primarily carried out by members of Lebanese military intelligence - has included “Syrian” torture techniques such as the “flying carpet” (being strapped on a foldable board), “shabeh” (suspending an individual by the wrists and beating them), or “balango” (suspended someone for hours with wrists tied behind their backs). Detainees also described being hung upside-down or forced into stress positions for prolonged periods, and being hit with metal sticks, electric cables and plastic pipes.

Two of the torture survivors were aged just 15 and 16 years old at the time. At least four men said they were beaten so badly that they lost consciousness.

One former detainee, Bassel, told Amnesty that after his transfer to Rihaniyyeh prison, he was beaten so badly every day for three weeks that his wounds festered. He said:

“They beat us with plastic tubes from the bathroom on our back. My back had open wounds that started becoming really bad. In the end, there were worms inside my wounds.”

Ahmed, who described his ordeal in detention at Ablah military intelligence centre, said he was beaten on his genitals until he lost consciousness. Another detained refugee said a security agent injured him so badly by beating his genitals that he urinated blood for days. While beating him, the agent said: “I’m hitting you here so you can’t bring any more children to this world, so that they don’t contaminate this community.”

Several detainees said Lebanese security forces made reference to their opposition to Syrian president Bashar al-Assad while beating them, indicating the attacks may have been politically motivated. Karim, a journalist, who was detained for eight days at the Beirut General Security office, said his interrogators asked whether he supported the Syrian president and when he said he did not they beat him harder.

“This report offers a snapshot of the Lebanese authorities’ cruel, abusive and discriminatory treatment of Syrian refugees detained on suspicion of terrorism-related charges.

“In many cases refugees who escaped war, ruthless repression and widespread torture have found themselves arbitrarily detained and held incommunicado in Lebanon, where they face many of the same horrors employed in Syrian prisons.

“There is no question that members of armed groups responsible for human rights abuses must be held accountable for their actions, but the Lebanese authorities’ flagrant violation of Syrian refugees’ right to due process has made a mockery of justice.

“At every stage, from arrest through to interrogation, detention and prosecution in unfair trials, the Lebanese authorities have utterly disregarded international human rights law.”

Amnesty’s report - based on interviews with former and current detainees, lawyers and an examination of legal documents - documents the cases of 26 Syrian refugees, including four children, detained in Lebanon on terrorism-related charges between 2014 and earlier this year. Since 2011, hundreds of Syrian refugees have been detained in Lebanon, often arbitrarily on trumped-up terrorism-related charges, or at times in relation to their membership of armed groups.

In all but one of the 26 cases, refugees reported being tortured, either during interrogation or detention. Most frequently this occurred at Ablah military intelligence centre, the General Security office in Beirut or at the Ministry of Defence.

“I stayed three days in a row, night and day, standing in the corridor, handcuffed and blindfolded ... We had to beg to go to the bathroom and for water. They gave us food once a day. There were officers guarding us so that we didn’t sit or sleep. If somebody tried to, they would force him to stand again.”

There have been no investigations into any of the torture allegations Amnesty documented, even in cases where detainees or their lawyers told a judge they had been tortured. In some cases, security agents requested the delay of court sessions leading to the loss of scars from beatings or other forms of torture.

Amnesty has also documented the ill-treatment of two women who were sexually harassed and verbally assaulted in detention. One was forced to watch as security agents tortured her son and another woman was made to watch her husband being beaten.

Lebanon passed an anti-torture law in 2017 but has failed to implement it, and torture complaints rarely reach court.

All 26 detainees, whose cases were documented by Amnesty, were denied access to a lawyer during initial questioning, in violation of Lebanon’s own laws and international law and standards. This undermined their ability to defend themselves or to challenge their detention. After arrest, refugees often reported having to wait several weeks to appear before an investigative judge, and in nine cases trials were delayed for up to two years, violating international law.

In many cases judges relied heavily on confessions obtained under torture or evidence from unreliable informants, and convictions were based on vague and overly-broad terrorism-related charges. At least 14 detainees told Amnesty they “confessed” to crimes they did not commit after being tortured or threatened. In 23 of the documented cases, detainees - two of them children - were tried before military courts, violating international standards against the trial of civilians before such courts.

In 14 of the cases documented, Amnesty found that terrorism-related accusations against Syrian refugees were made on discriminatory grounds including political affiliations, and in nine cases simply expressing political opposition to the Syrian government was considered evidence to justify convictions on “terrorism” charges.

A number of Syrians living in north Lebanon were arrested based on their real or perceived involvement in the 2014 battle of Arsal - when members of Jabhat al-Nusra and ISIS attacked the Lebanese army and abducted 16 members of the security forces. The battle of Arsal ended with a ceasefire deal that allowed thousands of Jabhat al-Nusra fighters and their families to return to Idlib in Syria. The cases examined also included a number of Syrian women detained in relation to their male relatives’ alleged activities, or in order to pressure the male relatives to confess or hand themselves over.

Amnesty is calling on the Lebanese authorities to ensure all Syrian detainees are granted a fair trial that adheres to international standards. They must also urgently end the practice of trying civilians in military courts.

Downloads
'I wish I would die': Syrian refugees detained on terrorism-related charges and tortured in Lebanon