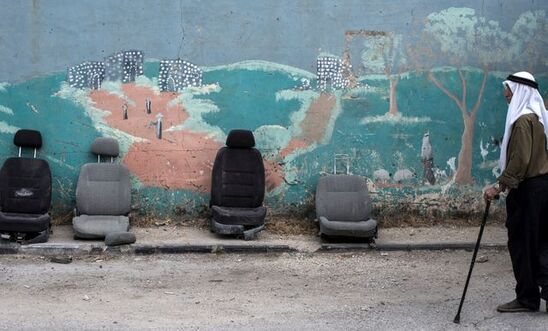 In 2017, 85-year-old Abdel Majid Abu-Srour broke his leg after falling when tear gas was used by the Israeli army against Palestinian protesters © Tanya Habjouqa/NOOR

The Pre-Trial Chamber of the International Criminal Court (ICC) has ruled that the ICC has jurisdiction over serious crimes committed in the Occupied Palestinian Territories (OPT), offering new hope for victims to access justice.

The ruling opens the way for an investigation into crimes committed in the OPT since June 13, 2014.

These include allegations against Israel of war crimes, including settlement-related activities, and crimes against humanity, such as persecution, deportation and transfer, as well as the crime of apartheid against Palestinian civilians in the West Bank, including East Jerusalem; crimes allegedly committed by Israel and Palestinian armed groups during the 2014 assault on Gaza and during the Great March of Return protests in 2018-19; and allegations against the Palestinian authorities in the West Bank of torture and support for attacks against Israeli citizens.

“The perpetrators of war crimes and crimes against humanity have evaded justice for more than half a century. An ICC investigation marks a long-overdue step towards justice for victims, and is a chance to end the cycle of impunity that is at the heart of the human rights crisis in the OPT.

“In the absence of independent and credible domestic investigations, an ICC investigation is the only way for Palestinians and Israelis to access truth, justice and reparations.

“We call on all governments to offer their full support to the ICC as it takes the next steps towards accountability, including by standing up to powerful states who try to shield perpetrators from the full scrutiny of the international community.”

Amnesty asked victims of possible war crimes in Gaza what an ICC investigation would mean to them.

Tawfiq Abu Jame’ is one of just three survivors of an Israeli air strike in Gaza which killed 25 members of his family, including 19 children, on 20 July 2014. He told Amnesty:

“[An investigation] would not, for sure, bring my kids back to life, however I am certain that I need to continue to try to find some sort of justice. It is shocking to me that six years after I lost so many members of my family and my house that impunity reigns supreme for those implicated in the tragic crime committed [….] We can never achieve justice in Israeli courts, the ICC represents our only hope to achieving long-denied accountability and justice.”

Between 1 and 4 August 2014, Israeli forces bombarded a heavily populated area of Rafah, a city in the southern Gaza strip. At least 135 civilians, including 75 children, were killed, among them 17-year-old Asil Abu Mohsen. Asil’s father Saleh Abu Mohsen told Amnesty:

“An ICC investigation … remains essential to my understanding of what justice means. Before knowing about a potential ICC investigation into Israel’s crimes, I had resigned myself to the outlook that there would be no justice in my lifetime for the crime committed against my daughter Asil and against many other Palestinians. I must say that the only justice we will get is through the ICC as no justice will be achieved through Israeli courts… Victims like us have becomes faceless numbers, but it’s time for our voices to be heard and for our suffering to be recognized.”

Amnesty is calling on the ICC to urgently undertake effective outreach to the affected communities in the OPT, informing victims of their rights to participate in the ICC’s cases and - on conviction of an accused person - to gain reparations.

The OTP can investigate any Rome Statute crimes committed “in the occupied Palestinian territory, including East Jerusalem, since June 13, 2014”, regardless of the nationality of the perpetrator. The OTP is not confined to investigating those crimes already set out in preliminary examination reports and may expand the scope of her investigation.

Australia, Austria, Brazil, the Czech Republic, Germany, Hungary and Uganda have all challenged the ICC’s jurisdiction over the “situation in Palestine”.

The US administration recently imposed sanctions against the ICC. Neither Israel nor the US are members of the ICC, and both have vowed to prevent an ICC probe into the allegations of crimes committed in the OPT.