Israel/OPT: challenge to travel ban on Amnesty campaigner to be heard by court 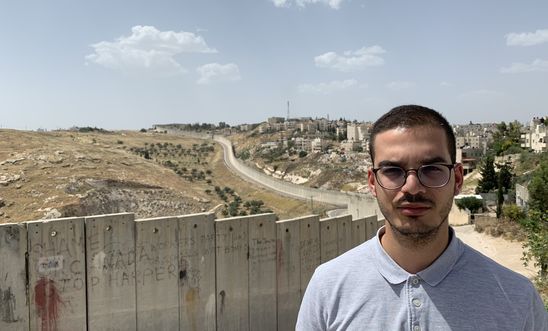 The Palestinian campaigner prevented from seeing his dying mother in December

The Israeli authorities must immediately lift a punitive travel ban imposed on Amnesty International’s Campaigner on Israel and the Occupied Palestinian Territories, the organisation said today ahead of a court hearing on the case on Sunday.

Since last October, Laith Abu Zeyad, a Palestinian living in the Israeli-occupied West Bank, has been barred from travelling abroad by the Israeli authorities for undisclosed “security reasons”.

In March, Amnesty petitioned the Jerusalem District Court calling for the ban - which it described as “absurd” - to be lifted. Amnesty’s court petition named the Military Commander of the West Bank, the Civil Administration, and the Israel Security Agency as respondents, seeking to have the ban lifted. Amnesty’s previous attempts to repeal the ban through administrative channels were rejected.

Sunday’s hearing will examine Amnesty’s challenge to the ban - though Laith Abu Zeyad himself will not be allowed to attend the hearing. He requires a special permit to enter occupied East Jerusalem where the court is located, yet the military offices responsible for processing permits are closed until 31 May, the actual day of the hearing.

Last September, Laith Abu Zeyad was denied a humanitarian permit to accompany his mother for medical treatment in Jerusalem for undisclosed “security reasons”, and was even prevented from seeing his mother before her death from cancer in December.

Amnesty has launched a digital campaign in support of Laith Abu Zeyad, with supporters and activists around the world showing their solidarity with the human rights campaigner and other Palestinians and Israeli human rights defenders being punished for their human rights activism.

“Amnesty International stands in full solidarity with Laith, a respected colleague, trusted friend and dedicated human rights defender who has done nothing to deserve this treatment.

“Laith’s case reflects a wider pattern of unjustified harassment against human rights defenders in Israel and the OPT, and demonstrates Israel’s growing intolerance of critical voices.

“The Israeli authorities have bizarrely - and without any legal clarifications or grounds - claimed they have ‘secret evidence’ that justifies the travel ban.

“There is every reason to believe that Laith is being punished solely for his human rights work, making him the latest in a long line of peaceful critics to face retaliation from Israel.

“While the world starts to ease lockdowns, for Palestinians in the Occupied Palestinian Territories - severe restrictions to basic liberties will remain a reality.”