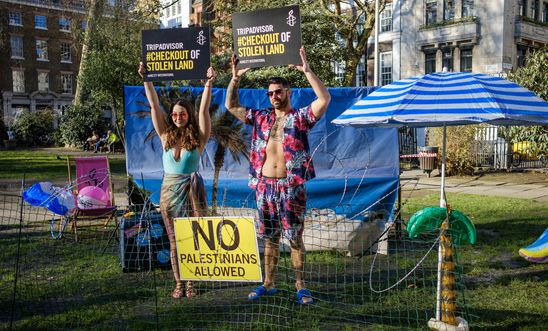 The publication of a UN database listing more than 100 companies involved in business activities in illegal Israeli settlements is an important step towards accountability in the Occupied Palestinian Territories, Amnesty International said today.

The Office of the UN High Commissioner for Human Rights yesterday released a report on companies with specific links to Israeli settlements in the West Bank. It had been mandated to do so by the UN Human Rights Council in 2016. The report lists several digital tourism companies including Airbnb, TripAdvisor, Expedia and Booking.com, which Amnesty International’s research has found are driving tourism to settlements and contributing to their existence and expansion.

Last year, Amnesty showed how Airbnb, TripAdvisor, Expedia and Booking.com are helping to support settlement expansion, and urged them to remove listings for attractions and accommodation located within the settlements.

More than 300,000 people globally have supported Amnesty’s “checkout” campaign calling on TripAdvisor to remove all its listings located within Israel’s illegal settlements or run by settlers in the Palestinian Territories, including in East Jerusalem.

Amnesty is calling for both the Office of the UN High Commissioner for Human Rights and the Human Rights Council to work in collaboration with other stakeholders to ensure the list of companies is regularly updated, to allow for continued scrutiny of businesses linked to human rights violations in the Palestinian Territories.

Under international law, when an occupying power builds settlements in occupied territory and allows its civilians to live in these settlements, it is committing war crimes. Settlements in the Palestinian Territories are built on unlawfully-appropriated land and have been the cause of a range of gross and systematic human rights violations against Palestinians.

Under the UN Guiding Principles on Business and Human Rights, companies are required to “avoid causing or contributing to adverse human rights impacts through their own activities and address such impacts when they occur”.

“The publication of this list is a timely reminder that settlements are illegal and must never be normalised.

“Naming the businesses which profit in the context of this illegal situation sends a clear message from the international community that settlements must never be normalised.

“These companies are profiting from and contributing to systematic violations against Palestinians.

“We call on companies to comply with their international responsibilities and stop doing business in the settlements.

“Listed businesses have no excuse - to continue their involvement in Israeli settlements is to knowingly breach their international obligations.”

In relation to the tourism sector, Saleh Higazi said:

“These companies are promoting tourist attractions which are linked to war crimes. This welcome move by the OHCHR must increase pressure on tourism companies to stop listing attractions on stolen land.”