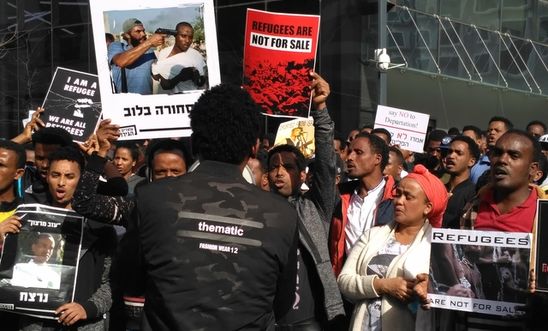 Israel’s policy of deporting African asylum-seekers to two unnamed African countries is illegal and an abdication of its responsibility toward asylum-seekers, Amnesty International said, as Israel’s Supreme Court considers the legality of the policy in a hearing today.

Israel has reportedly reached agreements with two countries - widely understood to be Uganda and Rwanda - though the details remain classified, and Uganda and Rwanda have denied their existence. Israel itself hasn’t provided details of the agreements, which it considers to be confidential and potentially harmful to the country’s international reputation.

Under the so-called “Procedure for Deportation to Third Countries”, launched in January, migrants who agree to leave are given approximately £2,460 and a ticket to either their country of origin or an unnamed “third country”. Those who refuse face indefinite detention. Israel claims the scheme facilitates “voluntary departures” of “infiltrators”, and Eritrean and Sudanese male “infiltrators” are required to leave Israel by 4 April.

The deportation procedure is based on the premise that deportees either never sought asylum and have lived in Israel irregularly, or sought asylum but did not qualify for it. Those who submitted their application after 1 January will also be deported.

Amnesty is insisting that such agreements are illegal under international law, violating a prohibition under the Refugee Convention against transferring anyone to a place where they would be at real risk of persecution and other serious human rights violations, or where they would not be protected against such a transfer later.

The Israeli Supreme Court has pointed out that the secret nature of the agreements denies asylum-seekers legal protection or access to legal recourse. Rwanda and Uganda have not only denied the presence of asylum-seekers arriving from Israel in their territory, they have also refused to acknowledge any duty towards them.

Over the weekend, more than 20,000 people demonstrated in Tel Aviv over the deportation plans.

“How can the Israeli government possibly describe this as a way of deporting asylum-seekers ‘voluntarily’ when the alternatives are returning to persecution or indefinite detention?

“Considering the scale of the global refugee crisis, the forced - and illegal - deportation of Eritrean and Sudanese asylum-seekers is a reckless abandonment of responsibility.

“It beggars belief that the Israeli authorities are now foisting their responsibility on countries who have only a fraction of the wealth and resources, and their own much larger refugee populations.

“The Israeli government must immediately halt the deportations of Eritrean and Sudanese asylum-seekers to Rwanda and Uganda and grant them access to a fair and effective refugee status determination procedure.

“Meanwhile, the governments of Rwanda and Uganda must immediately cease any co-operation with the Israeli government on this issue.

“The Israeli authorities need to know that the world is watching with outrage at their brazen disregard for human life, dignity and responsibility to the wider global community.”

Israel boasts one of the highest gross domestic products (GDPs) in the world, with GDP per capita more than 50 times that of Rwanda and more than 55 times that of Uganda. However, Rwanda hosts at least three times more refugees than Israel, and Uganda’s refugee population is more than 20 times that of Israel’s.

The main reason for the dramatically low recognition rate of Eritrean asylum-seekers is that Israel does not consider deserters from the Eritrean military service to qualify for refugee status. This flouts eligibility guidelines that has been issued by the UN Refugee Agency. In January, the Israeli Supreme Court found the Israeli government’s interpretation of the protection needs of Eritrean military deserters to be incompatible with the Refugee Convention. On 22 March, Israel’s Deputy Attorney General instructed officials to re-examine cases of Eritreans held in Saharonim Prison whose asylum claims had been rejected.