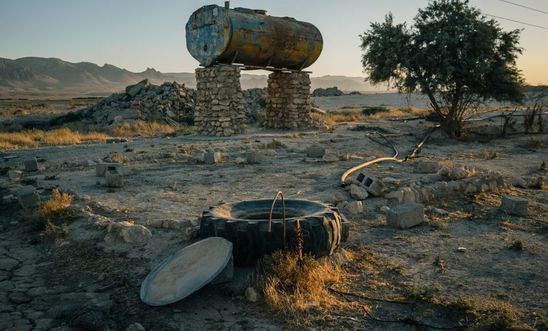 Hundreds of wells have been sabotaged, trees chopped down and farm buildings left in ruins © Amnesty International

Call for UN to investigate ISIS crimes related to the environment

As part of its brutal campaign against Iraq’s Yezidi minority, the Islamic State armed group committed war crimes and crimes against humanity by deliberately and systematically destroying their farmlands, Amnesty International said in a new report today.

In addition to their notorious mass killings, rape and enslavement of Yezidis in north-west Iraq from August 2014 onwards, ISIS systematically sabotaged the farmland of this overwhelmingly agrarian population, burning orchards, looting livestock and machinery, and laying landmines in farming areas.

Amnesty’s 37-page ‘Dead Land’ report, based on interviews with 69 people - including 44 current or former farmers from rural areas, including the Sinjar district, scene of some of the most extensive rural damage - shows how ISIS fighters threw rubble, oil or other materials into Yezidi wells, and stole or destroyed pumps, cables, generators and transformers.

The group also burnt or chopped down orchards, and pulled down and stole vital electricity lines belonging to numerous subsistence and smallholder Yezidi farmers.

A year after the Iraqi government declared victory over ISIS, Amnesty’s report shows how Yezidis are still suffering.

Hadi, a former farmer in his mid-40s from a small village south of Sinjar Mountain, told Amnesty what he saw when he returned to his farm after fleeing ISIS:

“[It was] pure destruction. I had a well - 220 metres deep - as well as a generator and an irrigation pipe system. [ISIS] threw rubble in my well and filled it to the top. My trees were chopped down - I could see the [chainsaw] marks. The irrigation system - from the pump to the pipes - was stolen. They did this to send a message: that you have nothing to return to, so if you survive, don’t even think of coming back.”

Majdal, a farmer in his mid-50s from another village south of Sinjar Mountain, said:

“There is nothing left. Now the house is destroyed, and all the trees burnt down. We had 100 olive trees, but when I went I didn’t see a single tree in any direction. They were chopped down and burnt … They wanted us to lose everything. They didn’t want us to be able to come back to our land.”

Amnesty visited an abandoned farm in a small village near Sinune town, north of Sinjar Mountain. ISIS fighters had poured oil down one irrigation well and dumped debris in another. A large water tank was empty and plastic irrigation pipes lay broken and scattered nearby. Meanwhile, adjacent fields were completely barren.

Water engineers told Amnesty that they had no doubt the destruction was deliberate. No comprehensive assessment has been undertaken, but local officials estimate that in the area near Sinune alone, ISIS put 400 out of 450 irrigation wells out of use.

Amnesty is also calling for the UN-mandated team established in September last year to include ISIS crimes related to the environment within the scope of its investigation.

“Our investigation reveals how ISIS carried out deliberate, wanton destruction of Iraq’s rural environment around Sinjar Mountain, wreaking havoc on the long-term livelihoods of Yezidis and other agrarian communities.

“Today, hundreds of thousands of displaced farmers and their families can’t return home because ISIS went out of its way to render farming impossible.

“Unless there is urgent government assistance, the long-term damage inflicted on Iraq’s rural environment will reverberate for years to come.

“Those displaced by ISIS war crimes have a right to full reparation and to justice.

“The government must ensure that survivors receive restitution or, if this is not possible, compensation.

“When ISIS tore through Iraq in 2014, it thrived off rural poverty and resentments, so Iraq’s government should be concerned that something similar could happen again.”

Overall, the conflict against ISIS had a devastating effect on Iraq’s agricultural production, which is now an estimated 40% lower than 2014 levels. Before the ISIS onslaughts, around two-thirds of Iraq’s farmers had access to irrigation - three years later, this had fallen to 20%. Around 75% of livestock was lost, with losses reaching 95% in some areas.

Only about half the people displaced after ISIS took control of the Sinjar area in 2014 have returned. Numerous displaced people from the area told Amnesty they felt they now had nothing to go home to, with their farms and livelihoods decimated. This pattern appears to be reflected in rural areas elsewhere in Iraq.

First, ISIS fighters rounded up and killed any men and boys who hadn’t been able to seek sanctuary on Sinjar Mountain. Soon after, they abducted and sold an estimated 6,000 young women and children into slavery elsewhere in Iraq and in Syria. Other Yezidis sought refuge in Europe and other parts of the Middle East.

By the time the north side of Sinjar Mountain was retaken from ISIS in December 2014, and the south side in November 2015, thousands of years of Yezidi life had been all but obliterated. The Kurdistan Regional Government took control of the area before handing it over to Iraqi central government control in October last year.