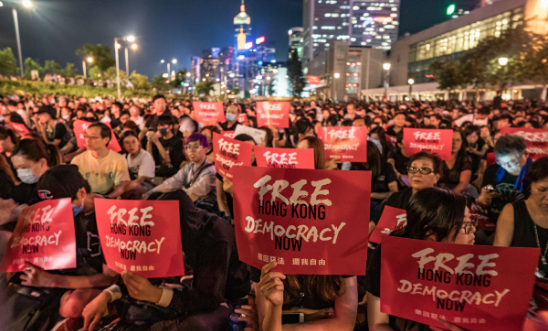 For 20 years, CHRF organised often in close collaboration with the police, large-scale peaceful rallies in Hong Kong without being accused of breaking any law

Responding to news that the the Civil Human Rights Front (CHRF), a prominent coalition of Hong Kong rights groups and organiser of many large-scale protests in the city has disbanded, Joshua Rosenzweig, Amnesty International’s Head of China team, said:

“Days after Hong Kong lost its biggest teachers’ union; the city’s leading civil society voice has also been forced out – disbanding in the face of a long-running campaign to discredit and disable it through a combination of harassment by police and pro-Beijing media.

“The Hong Kong authorities’ assault on human rights has ramped up with these attacks. Along with political parties, media outlets and unions, we sadly now must add NGOs to the list of those targeted simply for doing their legitimate work.

“The pattern of self-censorship seen this week also signals a concerning domino effect, as Hong Kong’s draconian national security law has triggered an accelerating disappearance of independent civil society groups from the city.

“The demise of CHRF is yet more evidence that Hongkongers’ rights to freedom of association, expression and peaceful assembly can no longer be taken for granted under the authorities’ obsession with ‘national security’.

“The Hong Kong authorities must respect and ensure the rights of all people to associate freely. Instead of threatening members of civil society organisations with criminal sanctions, they should create the best possible environment for the existence and operation of associations, including the holding of peaceful assemblies by civil society.”

CHRF organised the city’s annual 1 July march between 2003 and 2020. It also organised three police-authorised demonstrations in 2019 that drew millions onto the streets in protest against proposed amendments to Hong Kong’s extradition laws that many feared would lead to people in the city being sent to face trial in mainland China.

On 18 August 2019, police banned CHRF from organising a march but allowed a rally in Victoria Park. An estimated 1.7 million people peacefully walked along the main streets of Hong Kong as they tried to enter and exit the park and attend the rally.

As part of an investigation into its operations, in April 2021 police asked CHRF questions including why it was not registered under Hong Kong’s Societies Ordinance. It was also asked to provide details of its funding and explain why it co-signed a petition to the United Nations High Commissioner for Human Rights in December 2020 about excessive use of force by police in Hong Kong.

The police probe followed a series of articles critical of the group in pro-Beijing media outlets in Hong Kong. CHRF ultimately refused to comply with the police’s request.

The disbandment of the CHRF comes less than a week after Hong Kong’s largest teachers’ union, the Hong Kong Professional Teachers’ Union (HKPTU), also ceased operations in the face of “enormous pressure” from the authorities. The group had similarly faced criticism in pro-Beijing media, and local education authorities subsequently stopped cooperating with the union.