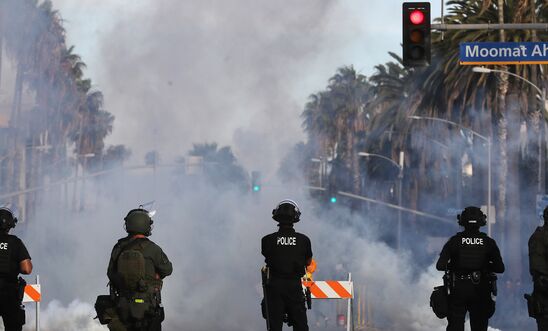 Website details more than 100 incidents in 31 countries and territories

Amnesty International has today published new evidence of the misuse of tear gas by security forces in several countries in the second half of 2020, including during protests around the election in Uganda, the Black Lives Matter movement in the USA, and in the repression of protesters in Lebanon.

The organisation’s interactive website Tear Gas: An Investigation has now been updated to include new cases of police committing human rights violations against peaceful protesters around the world.

“The ongoing misuse of tear gas by police forces around the world is reckless and dangerous, often injuring and sometimes even killing peaceful protesters.

“Our updated analysis is further proof that security forces continue to misuse this less lethal weapon on a massive scale. Far too often in 2020, peaceful protesters were met with violence, including the widespread, unlawful use of tear gas, which can amount to torture or other ill-treatment in certain circumstances.

“We are again calling on authorities worldwide to respect the right to peaceful protest, and hold to account those who used tear gas unlawfully against people exercising this right.”

The update includes 27 new events in 12 countries where tear gas has been misused, with open source investigators verifying the location and date of each instance, and assessing its lawfulness. In total, the website now includes videos of more than 100 incidents of tear gas misuse from 31 countries and territories.

In Uganda, ongoing political unrest in the aftermath of the contested election has been met with an internet blackout, as well as a crackdown that has included killings, beatings and violent dispersal of opposition supporters using tear gas and rubber bullets.

In Lebanon, protesters took to the streets following the devastating blast at the port of Beirut in August 2020 that killed at least 204 people. During the protests against the government’s response to the explosion, Lebanese security forces repeatedly used dangerous and unlawful force to attempt to control protests, including the excessive use of tear gas.

In Nigeria, #EndSars protests broke out in October 2020, with people demanding an end to police brutality, extrajudicial executions and extortion by the Special Anti-Robbery Squad (SARS), a unit of the Nigerian police tasked with fighting violent crime. They were met with unlawful use of force by the army and police forces, including the firing of tear gas, and at least 12 peaceful protesters were reportedly shot dead when the army opened fire on thousands of protesters at the Lekki Toll Gate.

In dozens of cities across the USA, a range of law enforcement agencies targeted peaceful Black Lives Matter protesters with tear gas and other crowd control agents. There were similar examples of tear gas misuse during protests in Indonesia, Peru and Guatemala.

Using open source investigation methods, the organisation verified and highlighted events where tear gas has been misused. The analysis was carried out by Amnesty International’s Digital Verification Corps, a network of students at seven universities on four continents trained in sourcing and verifying content from social media.

The site also includes a video produced with SITU Research, which analyses the performance characteristics of tear gas, explains the inner workings of the munitions, and shows how their misuse can maim and kill.

Amnesty International documented police abusing tear gas in multiple ways, including: firing into confined spaces; firing directly at individuals; using excessive quantities; firing at peaceful protests; and firing against groups who may be less able to flee or more susceptible to its effects, such as children, older people and people with disabilities.