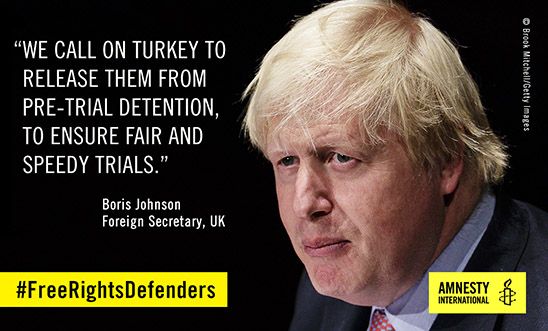 .@BorisJohnson on how the global community should approach Turkey in the 2017 #LowyLecture – full speech here: https://t.co/EqwNMfaIUY pic.twitter.com/01rQow2mMM

Speaking at an event in Sydney, Australia, last night Mr Johnson said he ‘deplored’ the actions of the Turkish authorities in arresting human rights activists, including Amnesty campaigners. In a lecture at the Lowy Institute, the Foreign Secretary said:

"We will continue to argue for balance and moderation in our European foreign policy; and yes we join our friends in deploring the actions of the Turkish authorities in arresting and imprisoning journalists and human rights activists, including Amnesty International campaigners.

"We call on Turkey to release them from pre-trial detention, ensure fair and speedy trials, and to find a new way forward.

"But we also believe that we must engage with Turkey, and that it would be a great mistake to demonise or to push that extraordinary country away from us. That is not the right way forward, either."

With Mr Johnson’s intervention, the UK now joins similar demands made by the European Commission and the governments of Germany, the US, the Netherlands, France, Belgium, Ireland and Austria.

"This is a very welcome step and sends a clear message to President Erdoğan and his government that Turkey’s crackdown on human rights activists is utterly indefensible and has to end.

"We’re urging the Foreign Secretary to continue pressing for their release at every opportunity with his Turkish counterparts.

"The global outcry over Turkey’s human rights crackdown is growing louder by the day.

"Amnesty International demands the immediate and unconditional release of all human rights defenders in Turkey."

Similar calls for the activists’ release include:

United States - "These politically-motivated arrests were carried out to frighten and suppress those willing to stand up for human rights in Turkey...I call on Turkish authorities to release İdil Eser and her fellow activists without delay or condition." (18/7/17).

Angela Merkel - "This is another case where, in our view, innocent people are caught up in the wheels of the justice system and end up in detention … We declare our solidarity with [Peter Steudtner] and all the others arrested … the German government will do all it can, on all levels, to secure his release." (18/7/17)

Germany - "Claims of terrorist links are absurd. It is appalling to accuse Amnesty and other rights organisations of terrorism." (18/7/17)

France - "France remains concerned by the recent arrests that targeted Turkish officials of Amnesty International as well as other journalists and human rights defenders. We call for their quick release." (18/7/17)

Belgium - "The Minister calls on the Turkish authorities to drop all charges against the 11 people in question, immediately and without conditions." (20/7/17)

Austria - "This is a transparent attempt to intimidate and silence human rights defenders. We will press for their immediate release at all levels." (20/7/17)

Ireland - "The targeting of human rights activists is not an activity we expect to see in a country which respects basic human rights and the rule of law, and I call on the Turkish authorities to release those arrested." (20/7/17)

The Netherlands – "The Dutch government has strongly condemned the arrests and lack of protection of human rights defenders in Turkey...and calls for the immediate release of these recently arrested human rights activists." (20/7/17)

European Commission - "We call for the immediate release of these people." (20/7/17)

Over a million people globally took action earlier this week, calling on Federica Mogherini, the European Commission’s High Representative for Foreign Affairs, to urgently raise the issue of jailed human rights defenders at her meeting with the Turkish Foreign Affairs and EU Ministers on Tuesday.

Amnesty International UK have relaunched an online action calling on the Turkish authorities to release İdil, Taner and the other human rights defenders.

Arrests in June and July

İdil Eser, Amnesty International’s Turkey Director, has been detained since 5 July with nine other human rights activists. Taner Kiliç, Amnesty International’s Turkey Chair, has been detained since 6 June. They have been jailed on false allegations that they are involved with "terrorist organisations". Many other human right activists in Turkey are either detained or banned from travel as they await charges.