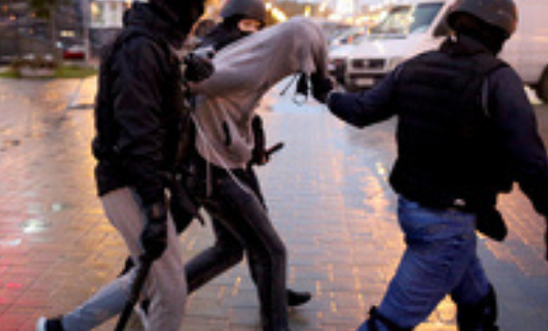 More than 900 abuses by police logged, but not one criminal investigation has yet been launched

The Belarusian authorities have arbitrarily detained thousands of people and subjected hundreds to abuse and torture as part of the country’s widespread and brutal crackdown on dissent in the wake of post-election protests, Amnesty International said in a new report published today (27 January).

The report - Belarus: “You are not Human Beings” - details harrowing accounts of peaceful protesters being arrested en masse and subjected to torture, stripped naked, mercilessly beaten, held in stress positions, and deprived of food, drinking water or medical care for days.

Since demonstrations began in August last year, the Belarusian authorities have admitted receiving more than 900 complaints of abuses committed by police, yet not one criminal investigation has been launched against law enforcement officers. In contrast, hundreds of criminal investigations have been opened against peaceful protesters, many of whom are victims of torture and ill-treatment.

“Since the start of post-election protests in Belarus, human rights groups have collected evidence of the torture of hundreds of peaceful protesters and documented the deaths of at least four.

“We have repeatedly called for effective investigations to bring those responsible to justice - but there is little hope of that from a system that not only protects police with anonymity, but also encourages intimidation and further violence against victims and witnesses.

“The total failure of the Belarusian justice system to ensure accountability means justice must now be pursued internationally. Governments, international and regional organisations should use all their leverage to pressure the Belarusian authorities to end this assault on human rights. The international community cannot stand by."

During last year’s protests and in their aftermath, Belarusian law enforcement used dozens of detention centres to arbitrarily detain peaceful protesters across the country, including at the notorious ‘Akrestsina’ facility in Minsk.

On the night of 13-14 August, relatives of those detained at Akrestsina recorded the sounds of incessant beatings which were clearly audible from outside the facility, along with numerous voices screaming in agony, with some heard begging for mercy.

Tsimur*, a 25-year-old doctor from Minsk, was arbitrarily arrested on 10 August and sent to Akrestsina. He told Amnesty: “Whoever cried, begged [the officers] not to beat them - they were beaten even worse.”

Mikalai*, who spent five days in police detention in Orsha town, described how he was told to walk through a “corridor” of some 50 police officers who beat him and other detainees with truncheons. He suffered repeated blows to his head, and his legs turned blue from the beating he sustained.

The exact number of arbitrarily detained protesters who have passed through Akrestina and other detention facilities throughout Belarus remains unknown. At the start of December 2020, it already exceeded 27,000 people, according to the UN High Commissioner for Human Rights. Arbitrary arrests have since continued.

While the Belarusian authorities have admitted receiving more than 900 complaints of abuses committed by law enforcement officers during the demonstrations, not a single criminal investigation related to these complaints has been launched. As well as facing severe reprisals, the complainants have been confronted with bureaucratic hurdles, delaying tactics and clear obstruction from a system designed to discourage and intimidate them, and invalidate and neglect their complaints and their evidence.

One Akrestsina survivor told Amnesty that after she had managed to have her complaint registered and her injuries examined by an official medical forensic expert, she heard from the investigator that he would not start a formal investigation without an “order from above”.

Instead of ensuring the prosecution of those suspected of human rights violations, the Belarusian Prosecutor General reported on 28 October that 657 criminal cases had been opened against protesters, with more than 200 individuals already charged with mass riots and violence against police officers. Civil society organisations have documented scores of cases against peaceful protesters opened under politically-motivated charges.

Belarus is bound by international law to uphold the human rights of all those on its territory, including ensuring the absolute prohibition of torture and investigating, and sanctioning those responsible.