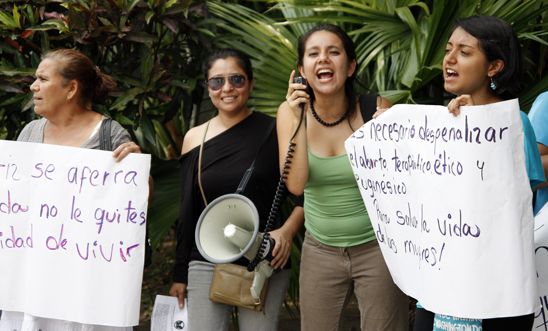 After two months of dragging its feet, the Salvadoran government finally acted this week to save the life of Beatriz, aged 22, a pregnant women facing death if denied medical treatment. On Monday, she received an early caesarean section and is now recovering in hospital.

Your activism helped to save Beatriz’s life.

Hundreds of thousands of you mobilised swiftly to support Beatriz. You sent appeals via Pocket Protest, wrote your own letters, posted solidarity photos or supported our global Twitter action.

Due to your overwhelming support, Beatriz was never alone in her struggle to access the medical care she wanted and needed. Beatriz and the Agrupación Ciudadana, the NGO in El Salvador working tirelessly on her behalf, particularly wish to thank everyone who took action in support of Beatriz and the campaign to protect her life and health.

As this case shows, by raising our voices together we can prevent injustice, and give strength and protection to the most vulnerable. When a brave young woman known as 'Beatriz' spoke out because her life was being being endangered unnecessarily by authorities in El Salvador, we stood beside her. And when her call was finally heard, it was the cries of thousands around the globe that were answered too. Together we are powerful.

If you would like us to send you urgent actions like this in future, text URGENT and your full name to 70505 to join our SMS network, Pocket Protest. Over 14s only please*. See terms and conditions
Already a member of Pocket Protest? If so, please ask your friends and family to join too (provided they are over 14 years old). Text FRIEND to 70505 and we’ll send you a text message you can forward onto contacts in your address book.

All of you who took action helped make possible the one thing that Beatriz wanted all along – to return home to her family. We wish her a full recovery and hope she is well enough to go home soon.

Yet it should never should have come to this.

While we are thankful that Beatriz’s life is now safe, she should not have been forced to suffer in this way for weeks on end, wondering if her young son would be left without a mother.

On the advice of her doctors, Beatriz asked for a termination two months ago when it became clear that continuing with the pregnancy would almost certainly have killed her. She has serious medical conditions including kidney disease and lupus.

However, the authorities refused permission for her to have the life-saving treatment, even though the foetus was not expected to survive either. As predicted, when born by caesarean on Monday it was missing large parts of its head and brain and survived only a few hours.

Had the abortion gone ahead, both Beatriz and the doctors who treated her would have faced long prison sentences. For in El Salvador - as in many other countries – there is a total ban on abortion, even when a woman or girl’s life is at risk or she is a survivor of sexual abuse. Such laws effectively amount to torture, discrimination and the denial of some of the most basic human rights to life and to dignity.

We call on El Salvador to end its total ban on abortion and bring its laws in line with human rights law and standards so that no woman is denied medical treatment necessary to save their life or health.

No more women or girls must be forced to suffer as Beatriz has.