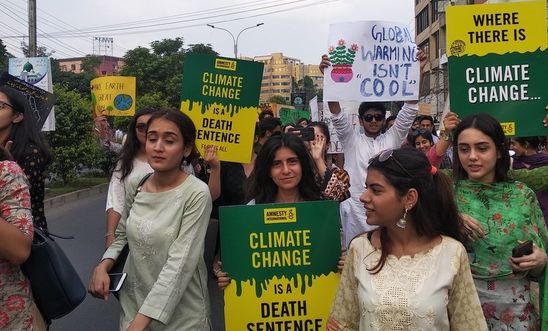 Pakistan's Prime Minister, Imran Khan, held a press conference on 30 November specifically to address the smog crisis that gripped Punjab during 2019. Accepting that smog was a “silent killer”, he rolled out a plan in line with expert recommendations to tackle the toxic air pollution. We welcome the responsiveness of the Government of Pakistan, and their willingness to address the crisis. We will be monitoring the situation closely to see them follow through on their commitment to clear the air.

In a letter responding to Amnesty International's letter to the Pakistani government about its hazardous air, Pakistan's Climate Change Minister, Malik Amin Aslam Khan, said “I want to assure you, that our Ministry is committed to play its role for shifting the landscape in Pakistan towards a cleaner, greener and sustainable future and particularly targeting the growing challenge of air pollution and climate change”.

Prolonged or heavy exposure to hazardous air can result in severe health issues, including asthma, lung damage, bronchial infections and heart problems, and shortened life expectancy – putting people’s rights to life and to health at risk, as well as their right to a healthy environment.

The worst air pollution in the world

In November and December 2019, the air in Punjab, Pakistan’s most populous province, was so toxic that people’s health and lives were in grave danger. Schools were forced to shut down, recorded respiratory illnesses were on the rise, and it became painful to even breathe.

On 21 November, the Air Quality Index in Lahore, the capital of Punjab, reached 598 at 1pm – far exceeding the threshold for ‘hazardous’ levels, which begin at 300. On that day, and others, Lahore recorded the worst air pollution in the world. During this time, the level classified as "satisfactory" in Lahore would be considered “moderately polluted” in China and India, and “unhealthy” in Singapore, South Korea, and the United States.

Levels of air quality have been rated “near unhealthy” and “very unhealthy” for most of the year in Punjab. During the “smog season” – from October to January – air quality reaches “hazardous” levels, as recorded by multiple independent sources. The high level of smog is neither a new problem, nor one that came without warning.

In response to the crisis, Amnesty International attempted to mobilise its supporters around the world to campaign on behalf of the entire Pakistani population. The campaign received global coverage, making headlines in The New York Times, Time, BBC, Newsweek, The Washington Post, and breaking news bulletins on Pakistani news channels; with the media calling out the Government of Pakistan for failing to prioritise the public health crisis that the smog presented.

On 30 November, nine days after the action was initiated, Prime Minister Imran Khan held a press conference outlining a plan to tackle the smog and emphasising the deadly consequences of letting the crisis unravel. This is the first time a prime minister has held a press conference solely to discuss air pollution – showing that the campaign elevated the issue to the very highest levels in the government.

While the commitments made by the authorities to address the smog crisis have been welcomed, the air in Punjab remains at levels regarded as unhealthy to very unhealthy. We will be monitoring the situation closely to ensure that the Government of Pakistan follows through on their commitment to clear the air.