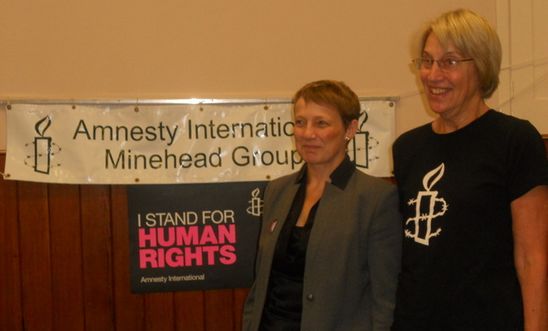 MEP for the South West, Clare Moody, brought a positive message about the EU's work on human rights to our July meeting. In a wide-ranging talk, Clare highlighted what she said were two really significant recent votes in the European Parliament. The EU has banned the trade in torture tools and has put in place measures to prevent the trade in 'conflict minerals' from fuelling wars in countries such as the Democratic Republic of Congo. In Ukraine, the EU has become a 'very trusted actor' in its efforts to help people displaced by conflict. And it is championing the campaign against human rights abuses in Azerbaijan.

Clare spoke about what she said was the horrifying crisis around the Mediterranean and said the European Commission had been trying to get other member states to help Italy and Greece by taking on some responsibility for migrants. And she said it was shameful that the UK had taken only 200 of the two million people displaced by the conflict in Syria.

She said the rise of far-right political parties in countries including France, Hungary, Finland, Denmark and Greece should ring alarm bells. Clare concluded by saying we should not forget the values that brought about the creation of the EU, from the ashes of two world wars.

Following the last European elections, our group wrote to all our new MEPs inviting them to meet us. So far, Clare Moody is the only one to accept our invitation.