Persecuted in Ethiopia : No refuge in Africa 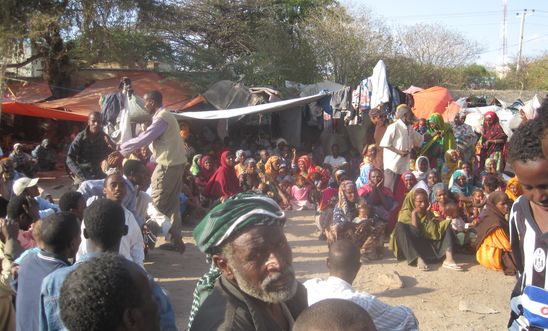 Destitute Oromo refugees camping on the street in Hargeisa, Somaliland, before being evicted by the government in 2012 © Picture supplied by Dr Trevor Trueman

On 2nd Sept 2013 we welcomed Dr Trevor Trueman who gave a compelling and deeply moving talk  on his 20 years experience of reporting human rights abuses in Ethiopia.

Dr Trueman, a member of Malvern Amnesty Group has extensive knowledge of Ethopia and the Oromo people who make up 40% of the population. He chairs the Oromo Support Group which is a non-political group set up to support and publicise the Oromo people's situation.

Dr Trueman spoke of his research and interviews he conducted with 186 Oromo people who had been subject to human abuses including the torture and rape many endured and who continue to live with the physical and psychological affects. Tens of thousands of people have been driven from their land, seeking asylum in countries including South Africa and Britain among others.

UK foreign aid presently totals £300 million a year. Dr. Trueman and Oromo in this country have continued to lobby successive British Governments about misuse of this money by the ruling party in Ethiopia. The group continues to campaign on behalf of the Oromo people.

More information can be found on the website  oromopress.blogspot.co.uk which includes a video of Dr Trueman delivering a speech in August entitled  'Trampled Grass the Human Cost of 22 years of Abuse'.

Donations towards the campaign were made by those attending the meeting: these will go towards a project which pays for refugee girls to go to secondary school in Nairobi.