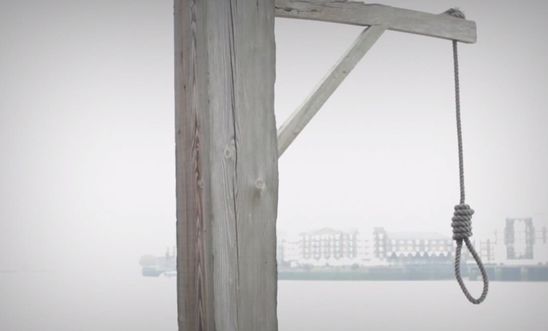 The last two people to be executed in Britain were led to the gallows 50 years ago today.

At 8am on 13 August 1964, two men, convicted just a few weeks earlier of murder, were led to the gallows at separate prisons in Manchester and Liverpool. No one involved knew it at the time, but Gwynne Evans and Peter Allen were the last executions before capital punishment was abolished in Britain.

50 years on, and support for the death penalty in the UK continues to fall. A YouGov poll has shown that less than half - 45% - of people still support the death penalty, down from 51% in 2010.

And it’s fallen dramatically around the rest of the world too. Since 1991 the number of countries abolishing state-sponsored execution has doubled, from 48 to 97.

But despite its fall in use, at least 3,357 people have been executed around the world in the last five years – not including thousands in China, where the execution record is a state secret.

The death penalty is a relic of the past - and here’s why we should continue to campaign to keep it that way.

The death penalty is not a deterrent

The UK’s murder rate is at its lowest in 30 years, despite a lack of executions. Many studies have shown that the threat of execution doesn’t prevent homicides.

Our report in October 2013 showed no correlation between crimes rates in similar countries  and an independent report by the US National Research Council found that US states with the death penalty have similar murder rates to states without.

‘The fruit of my experience has this bitter aftertaste: that I do not now believe that any of the hundreds of executions I carried out has in any way acted as a deterrent against future murder. Capital punishment, in my view, achieved nothing except revenge.’
Albert Pierrepoint, British executioner,1932–1956

Execution is the ultimate, irrevocable punishment, and the risk of executing an innocent person can never be eliminated.

Since 1976, 143 US death row prisoners have been completely exonerated for their crimes. They were found innocent for a wide range of reasons: new DNA evidence, falsified witness statements, or even misconduct by prosecutors.

In countries like Iraq and Iran, the death penalty often follows convictions relying on forced ‘confessions’ extracted through torture. We have reliable information that prisoners sent to Iraq’s death row were beaten with cables and subjected to electric shocks. Any country that deals in torture before deciding to execute has almost certainly executed the innocent.

You’re more likely to be executed if you’re a member of a minority group within a country that executes. The death penalty disproportionately affects racial, ethnic and religious minorities, and those living in poverty.

In the US, although half of all homicide victims are African-American, 77% of those executed since 1977 were found guilty of murdering white victims. And a 2007 study in Connecticut showed that African-American defendants were three times more likely to receive the death penalty than white defendants.

We’re only as strong as our supporters. Help us to end the death penalty:

Together, we can make the world one without the death penalty.