The death penalty: what’s changed since 1977? 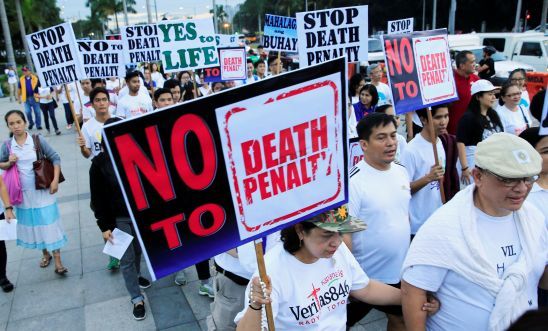 A protest against plans to reimpose death penalty in the Philippines earlier this year © REUTERS/Romeo Ranoco, 18 February 2017

It’s 40 years since we created the world’s first international manifesto to end the death penalty. Since 1977, we have seen huge amounts of progress in the campaign to end the use of the death penalty around the world. We’re so much closer to seeing the end of this horrific punishment – which we consider the ultimate denial of human rights. But we’re not quite there yet.

Stop the executions in the Maldives
The Maldives is set to start using the death penalty again after 60 years of not executing anyone. Three men now face execution by hanging.

Stop 14 men being executed in Saudi Arabia
14 men are due to be beheaded for allegedly being involved in anti-government protests, after they were tortured into confessing.

40 years of campaigning to end the death penalty

“When the state uses its power to end the life of a human being, it is likely that no other right is inviolate. The state cannot give life, it should not presume to take it away.”
Amnesty International's Declaration of Stockholm

In 1977, we drafted the Declaration of Stockholm – a declaration calling on every government around the world to stop using the death penalty.

Why did we decide to campaign to stop the death penalty?

We oppose the use of the death penalty in every single case. No matter what the crime, who the alleged criminal is, or the method proposed to execute them – we always stand against it.

One of the ways we protect human rights is by reporting when governments abuse them. Our research is used to help hold abusers to account in courts around the world.

Under international law, the death penalty is banned from use - except during times of war - under:

The European Convention on Human Rights (Protocol No. 13) bans use of the death penalty at all times, even during war.

In 1979 we started publishing statistics showing which countries were executing, how and why. We have reported on this every year ever since, and have become a key global authority on monitoring and reporting on death sentences and executions carried out by governments worldwide.

Back in 1977, the death penalty was legal in most of the world, with the exception of 16 countries who had outlawed it.

See how countries around the world used the death penalty now

We are calling on all countries that still have the death penalty in their laws to make it illegal. Where it is still illegal, we call on states to stop using the punishment and establish an official moratorium as a step towards making it illegal.

With your help, we won’t need another 40 years to reach our goal of ending the death penalty for good.