The horrors of Boko Haram have been well documented in recent years, but less reported is the torture inflicted on those accused of involvement with the armed group.

Often without evidence, hundreds of people in Cameroon have been linked to Boko Haram and as a result have been the victims of brutal violations by security forces. They have endured ruthless beatings, agonising stress positions and drownings — some have even been tortured to death.

‘They beat me half to death’

Using dozens of testimonies, satellite imagery, photographic and video evidence, we have uncovered proof of over over a hundred instances of detention and torture between 2013 and 2017, at over 20 different sites across the country. One of the sites used for detention and torture was a school, which clearly violates Cameroon’s obligations under international humanitarian law to protect civilians (and in this case, children) in armed conflict.

Samou*, who was arrested in March 2016, told us about his interrogation in one of the main detention centres in Salak, near the northern city of Maroua, a few days after his arrest:

‘They asked me to tell them if I knew members of Boko Haram. That’s when the guard tied my hands and feet behind my back and started to beat me with an electric cable, while throwing water on me at the same time. They beat me half to death.’

Suspended in the air and beaten 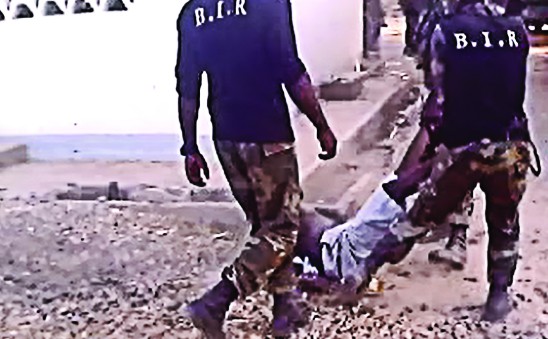 In Salak, there are two main cells measuring approximately nine by five metres, each containing up to 70 people. An officer in charge was described by victims as providing orders to interrogators, and by one victim as being able to ‘decide the life and death of each detainee’.

Another victim Mohamed* who spent six months in detention told us:

‘The soldiers asked us to confess. They told us that if we did not confess, they would bring us to Yaoundé [capital of Cameroon] to kill us. We replied that we preferred to be killed rather than to confess something that we didn’t know about. They beat us like this for four days.’

Presence of US and French military

We wrote to the Cameroonian authorities in April 2017 to share our findings, but received no response and all subsequent requests for meetings were refused. What’s more, there is photo and video evidence of US and French military personnel in Salak, suggesting they may have been aware of what was happening. We contacted the US Embassy, whose response can be found in the report. The French Embassy did not respond.

It’s possible that hundreds, if not thousands, have gone through unimaginable pain at the hands of military forces in Cameroon. Given the weight of the evidence we have uncovered, there is no doubt that these horrific violations amount to war crimes.

Authorities in Cameroon must immediately investigate the senior officers who were in charge of all detention facilities for their suspected responsibility in allegations of detention, torture, disappearances and deaths in custody. In addition, the US and other international partners must investigate their military personnel’s possible knowledge of the horrors that took place.

The full report, Cameroon’s secret torture chambers: human rights violations and war crimes in the fight against Boko Haram, can be read here.

*Names have been changed