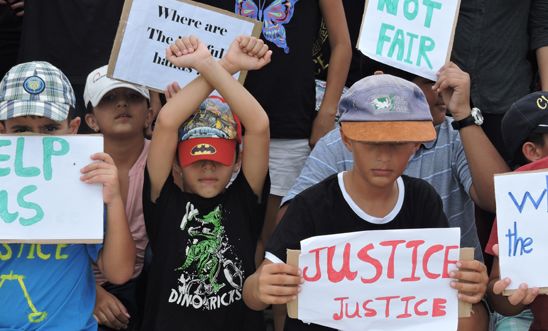 By Peter Frankental, our Business and Human Rights Programme Director

In a remote corner of the Pacific Ocean, the Australian government has created an island of despair, where refugees fleeing persecution are trapped and live in appalling conditions, while companies make rich pickings from their predicament.

It beggars belief that any board of directors with an iota of humanity would allow their company to make millions from a state of torment and limbo. But as we reveal in our new report Treasure Island, for some of these corporations the lure of profits has become irresistible, even in situations where they are perpetuating a system of cruelty and suffering.

Inevitably, many of these refugees and people seeking asylum have turned to self-harm in the face of a life of alienation, isolation, abuse and hopelessness. Some such as "Yasmin" from Iran would rather be dead. Her husband "Amir" told Amnesty last year how Yasmin's mental health started deteriorating during her time on Nauru to the point that she tried to kill herself on several occasions.

The crime for which they are sentenced to such purgatory is that of seeking safety on Australian shores from human rights violations in the countries from which they have fled by boat. The Australian government has publicly and proudly acknowledged that its offshore processing system on Nauru and Manus Island is harsh and cruel, saying that it is necessary to deter people.

This logic is perverse, because not only is seeking asylum not a crime, but it is a human right embodied in the 1951 UN Refugee Convention. Ratified​ by 145 State parties, this defines the term ''refugee'' and outlines the rights of those displaced because of persecution or conflict, as well as the legal obligations of States to protect them.

The Australian government outsources the operation of these facilities to the private sector. The government's leading contractor on Nauru is Broadspectrum, a subsidiary of Spanish multinational Ferrovial which holds a 25% stake in the company that manages Heathrow Airport and provides transport services for the London Underground system. Broadspectrum has been running Nauru's refugee processing centre since 2012.

The contracts are lucrative – a total of £1.5bn over three and a half years in the case of Broadspectrum. But no amount of money can absolve Ferrovial and Broadspectrum from complicity in these human rights violations committed by the Australian government.

They know what is going on, they are aware that the services they provide are a central part of a system that is designed to cause mental anguish to refugees, and that the only legitimate option open to them is to end their operations as soon as possible.

Ferrovial has announced that it will not bid for further work on Nauru and Manus after its current contract ends in October 2017. In the meantime they will make a substantial profit from Broadspectrum's operations.

But this now comes at greater legal and reputational risk. Their role on Nauru and Manus is attracting international attention and muddying the waters for other parts of their corporate group. The veil of secrecy surrounding these contracts is gradually being pierced.

For Ferrovial and any companies that may be intending to bid, Amnesty International is sending a clear message – you will not be able to conceal the abuses that are taking place on Nauru and Manus Island, which will taint you and undermine your global business interests.

The inhumanity of processing refugees in bleak and inhospitable environments offshore, where abuses are rife, should act as a call to action for all of us. While it is the Australian government that is primarily responsible for creating such a monstrous system, it has been aided and abetted by the private sector. When companies refuse to be complicit in such abuses, despite the profits to be gained, the inhumanities on Nauru and Manus Island will end.

Downloads
Report: Treasure Island - How companies are profiting from Australia's abuse of refugees on Nauru (Apr 2017)