Judging this year’s Amnesty Honour Award was far from simple. A wonderful shortlist of novels, each touching on some aspect of human rights, made things very difficult. And for that, I am very grateful. I’ve always adored books that make us consider the rights of our fellow human beings. Books that encourage greater empathy and understanding, and cast light on otherwise dark corners of the world. So, the shortlisted novels were an absolute delight to read – eye-opening, challenging, emotive and superbly crafted – they had it all.

Salt To The Sea took us into seemingly familiar territory but added a welcome freshness, bringing us voices we seldom hear. The Stars At Oktober Bend and The Smell of Other People’s Houses were moving and engaging, and likewise gave voice to characters and lifestyles all too often ignored. Railhead and Sputnik added science fiction, thrills, adventure and comedy, whilst posing big challenging questions too. Wolf Hollow and Beck were life affirming and full of hope despite how stark and often brutal the stories might have seemed.

Indeed, the wide variety of themes and voices made choosing a winner almost impossible. Almost. Yet, for my fellow judges and me, there was one tale that shone a light into the darkness just a touch more brightly. That was Zana Fraillon’s The Bone Sparrow. Each of the writers deserves special mention for a making us think about human rights, and should be sincerely applauded for doing so. But Zana Fraillon took on possibly the single most important human rights issue of our time. And that gave her story a slight edge. 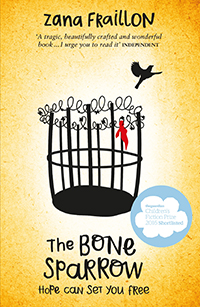 The Bone Sparrow is first and foremost a wonderfully written and plotted tale. The characters are sharply observed throughout and, in Subhi, Zana Fraillon has created an unforgettable voice. Born into captivity and having never known freedom, Subhi’s story is heartbreakingly common in today’s increasingly dangerous world. And yet it retains a sense of hope, a feeling that there will be another day - a better day for Subhi and all displaced human beings just like him, across our planet.

It is a challenging read that makes you shout in anger and despair, and one that makes you cry too. It highlights one of the most shameful situations in our supposedly modern world. Namely that, in the rush for economic globalisation and greater corporate and state power, there are tragic consequences. The poorest people on Earth are being left destitute. Millions are being dehumanised and criminalised without cause; cast aside and regarded as merely numbers. As an economic burden rather than fellow humans that desperately require our assistance.

The Bone Sparrow also has huge potential for teaching young people about the worldwide refugee crisis. I can imagine it being used in classrooms to encourage factual research and passionate debate. In highlighting human rights abuses and giving us such powerfully written voices, it becomes more than just a story. It becomes a wonderful instrument for empathy, promoting better understanding of the human lives behind sensationalist and horrific headlines.

The Bone Sparrow is a worthy winner of the Amnesty Honour. It is powerful and poignant, heartfelt and human. It is an important book, too, much needed in our modern world. The detention of refugee children is a disgraceful affront to human rights law and common decency. Zana Fraillon deserves great credit for confronting such a pressing matter. Her book offers no easy answers, however, nor does she treat her readership with kid gloves. Instead, and despite of the brutal truths, The Bone Sparrow offers a beacon of hope in an increasingly dark world. It is a wonderful novel and everyone should read it.

Bali Rai’s latest book is ‘The Harder They Fall published by Barrington Stoke.