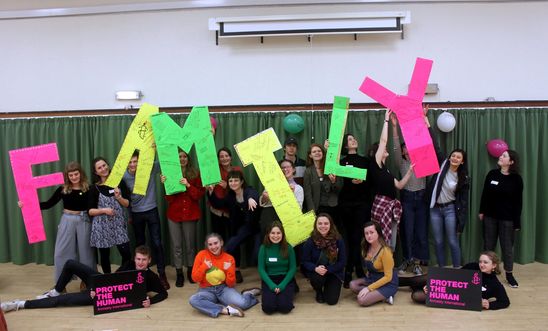 Last month, Edinburgh University and Aberdeen University Amnesty Societies successfully co-hosted the annual Amnesty Scottish Student Conference at Edinburgh University Chaplaincy Centre. By working together, the two student groups provided engaging sessions on a wide variety of subjects, and spread the workload slightly – since the organisation of this event was all done in the free time of student volunteers, co-hosting allowed each society to organise and concentrate on one day of the weekend. There were about forty students in total, who all managed to battle through the post-snowstorm weather in Scotland to make it for the weekend!

On Saturday 10 March, we began with a fascinating plenary about immigration detention with Kate Alexander, Director of Scottish Detainee Visitors, which was particularly timely given the hunger strike in Yarls Wood Immigration Detention Centre. This was followed by concurrent workshops on ‘Trading with Trump’, discussing post-Brexit trade deals with Liz Murray from Global Justice Now, and representatives from two of Amnesty UK Thematic Networks shared ideas on how best to use campaign resources as a student group, with Allie McGregor from the Women’s Action Network and Jennie Joy from the LGBTI Network inspiring us with ideas about their work and how we can contribute to their campaigning.

After a delicious lunch provided by Slurp, who fund qualifications and training for young people who are homeless or at risk, the afternoon began with a plenary on homelessness in Scotland with Gordon Maloney from Living Rent and Alice Thompson from Social Bite. Further workshops followed, with an investigation on human rights in Brazil and what ‘Amnesty’ can mean in context from Dr Jacob Blanc, and a craftivism session to prepare for our photo action.

We got together in the afternoon for our photo action which was in support of the Refugee Family Reunion Bill, which was due to be debated in Parliament the following week – and which passed this critical stage! There is still much to be done to make this vote become a reality for those affected. We still need to push for this Bill to become law or for the Home Office to change its policy.

We ended the day with a curry, followed by a trip to the pub – which included a sprawling and surprisingly competitive game of Trivial Pursuit!

On the Sunday, our plenary was hosted by Piper Booth, the Scottish representative of the Amnesty Student Action Network, and Malcolm Dingwall-Smith, the Scottish Regional Representative for Amnesty International UK, about forming a network of Scottish groups, be they local, student, or youth. Amnesty International is a huge organisation, so insight into its structure and how different types of groups can work together to protect human rights both in Scotland and abroad was invaluable. Our Sunday ended with moving performances by well-known authors of pieces of writing by refugees.

The Scottish Student Conference is an annual tradition, and one which reminds us all of the support that is there if we need it. With the high rate of turnover in student groups, and the tendency of university environments to become isolated bubbles, it’s so important that we continue to get together and remind ourselves of the importance of our activism and the impact that we can have together. The conference also provides an important opportunity to learn from each other and share ideas – what worked for one group may work just as well for another!

Speaking for myself, I left the conference feeling energised and inspired, and very ready to combine energy and resources to work with other student groups and local groups. Student groups are not the most well-established part of Amnesty International, but they are an important one. Students – use your energy, resources and connections, and let’s push to see human rights protected and advanced in Scotland, the rest of the UK, and throughout the world.