How the government plan to secretly strip people of their citizenship 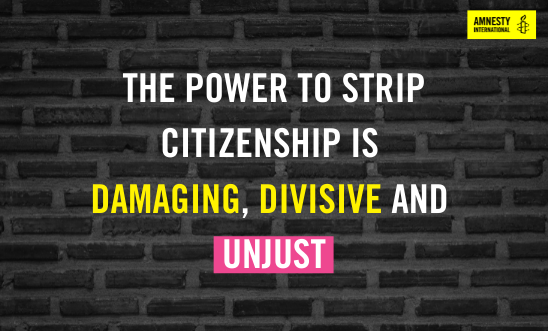 The government is seeking to acquire the power to secretly strip someone of their citizenship.

The Nationality and Borders Bill contains many dangerous and divisive provisions. It will damage the UK’s asylum system, hinder people from seeking asylum from torture and terror, and harm the victims of people smugglers, human traffickers and a host of other abusers.

But recently a new power that will permit the Home Secretary to secretly strip someone of their British citizenship was proposed.

This is a sinister power. It is also one that hugely disproportionately affects black and brown British people.

The injustice of this is heightened by the fact that the power does not apply equally to all citizens. The result is creating tiered levels of citizenship and increasing fear amongst racialised communities in the UK.

Opposition to the new power

There has been widespread objection to the new power. A petition on the Parliament website has attracted well over 250,000 signatures in less than a fortnight.

This means Parliament will have to consider debating it at a time when the Bill itself is being considered in the House of Lords.

But…removing this new power is not enough

Stripping citizenship should never be done in secret. But even if the power to do that is removed, the Home Secretary still has the power to strip citizenship when she says it is in the ‘public good’ to do so. In some circumstances, these powers can even mean that a person is left stateless.

The power to strip citizenship will, therefore, continue to be damaging, divisive and unjust – both because the Home Secretary is given such wide discretion to exercise it and because it is applies so disproportionately to distinct racial and religious groups.

However, the injustice and divisiveness of British nationality law – particularly how it is applied by the Home Office – goes very much further than citizenship stripping.

The many ways by which this is done also disproportionately affect black and brown British people – such as thousands of children, born in the UK, who grow up here entitled to citizenship but required to formally register their right to it.

An administrative fee of £35 for registration in 1983 has since been raised to a fee of over £1,000 – only £372 of which is said to be what it costs the Home Office to process someone’s registration. The remainder is profit to the department. This is a significant financial barrier to many.

Since 2006, the Home Office has also applied a requirement that children as young as 10, who wish to exercise their right to citizenship, must show themselves to be ‘good’.

An insult to all British people and their citizenship

If our Government continues down this dangerous path, there will inevitably be disastrous consequences, especially for racialised people.

We must do all we can to remove this provision from the Bill.

But that is not enough. There remains much else that must be done to restore full and equal respect for British citizenship from our own Government – the very people who ought to be most engaged to defend it.

The wider impact of this Bill – particularly on people who are seeking asylum and looking for safe passage to Britain, predominantly from the global south – must also not be understated.

Share this blog to help us warn about the dangers of the new potential power to strip someone of citizenship secretly.