Taking Pride in Our Unions - Part 1 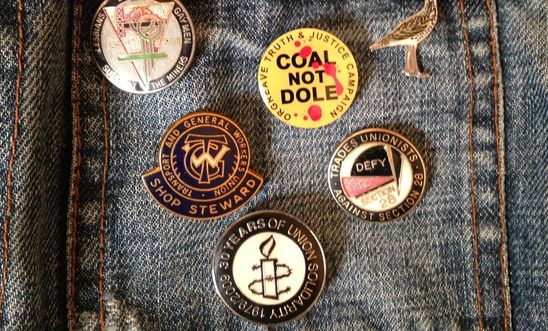 As we look ahead to LGBT History Month Amnesty UK is hosting a series of staff, activist and guest blogs to highlight the incredible story of how LGBT activists and our allies mobilised and organised in our unions to tackle prejudice in the workplace, bullying in schools, and to defeat unconscionable laws that denied us equal rights and protections in our communities.

Our unions and the British Trades Union Congress are today champions of LGBT rights at home and abroad. It is no exaggeration to say that trade unions are the largest organisations in the UK committed to ensuring that the rights of the LGBT communities are recognised and respected. Self-organising has been and remains key to that dynamism.

This blog series will explore how that was achieved – in one generation - against a backdrop of deep social hostility towards LGBT people, a government hell-bent on breaking the unions, widespread and violent industrial disputes including the miners’ strike, and legislation that outlawed the “promotion” of lesbian and gay relationships in schools and public services. The pivotal decades of the 1980’s and 1990’s also saw our communities torn apart by the calamity of AIDS, which stole many of our brightest and best and beloved.

Widespread labour unrest was matched by violent police tactics against workers on picket lines, state repression of consensual sex between gay men, censorship of LGBT literature, arrests on Pride marches, and unprecedented mass mobilising by our communities to tackle AIDS in the face of bigotry and fear-mongering by media and politicians alike.

The impulse for this special blog series is the publication of Peter Purton’s Champions of Equality: Trade Unions and LGBT Rights in Britain, his account from the front lines of LGBT and trade union solidarity, which we are proud to launch with a panel discussion and “village fete” at the Human Rights Action Centre in London on the evening of Thursday 8 February. The event is sponsored by Lawrence and Wishart, the TUC and Amnesty UK, and is free to attend but booking is essential.

I played a small part in that history, both as a gay activist and passionate trade unionist, and I will be moderating the panel discussion. The photo above is of my veterans’ badges, which I will be wearing with pride on the night.

As Peter will explain in the first blog of the series, these struggles – whether on the picket lines or during our Pride protests – were not so much about heroics or valour, but rather necessity and solidarity – and huge ambition.  Except for the remarkable story of Lesbians and Gay Men Support the Miners, LGSM, so poignantly recounted in Pride the Movie, as Peter says, most of this account remains, until today, hidden from history. The labour movement has a strong and instinctive impulse to learn from, and celebrate, its past and traditions. Peter’s account adds another chapter to the record and reminds us that it is through solidarity, organising and mobilising that we can, together, make the world better, fairer and more just.

You can follow and reflect on our efforts using the hashtag #PrideInOurUnions.

For those of you who are Amnesty UK members, we will be screening Pride the Movie and hosting a workshop with LGSM as part of our National Conference which this year takes place on the weekend of 7-8 April in Swansea, gateway to the Dulais mining communities.  Find out more, register, or join Amnesty here.