One year on, we are still Troy Davis

One year ago at 11.08pm, Troy Anthony Davis was executed by the State of Georgia, despite a massive global outcry against the flawed system that killed him. More than 60,000 of us in the UK emailed the authorities, asking them to make the right choice. We stood outside embassies. We reminded the US that #TheWorldIsWatching.

Before his death, Troy said “The struggle for justice doesn’t end with me. This struggle is for all the Troy Davises who came before me and all the ones who will come after me.”  And the struggle hasn’t ended. As we promised last year we haven’t stopped campaigning for justice, and for the abolition of the death penalty. Take action today in honour of Troy's legacy

One year on and we’ve made progress

After Troy’s execution, you helped to persuade the EU to block the export of drugs used to kill, such as the Denmark-produced Pentobarbitol, used as part of the lethal cocktail to execute Troy and many others on America’s death row. Across the US, support for the death penalty is at its lowest in 39 years. And in April this year, Connecticut became the 17th US state to abolish the death penalty.

When we’ve called for help, you’ve answered. In Gambia, international outcry over the past few weeks (including 20,000 messages from you) at President Jammeh’s pledge to execute all 47 of its death row prisoners has stopped his plans in their tracks.

One year on, there’s still work to do

59 countries still use the death penalty as a punishment for crimes ranging from sodomy (Iran) to sorcery (Saudi Arabia). Japan resumed executions this year (after their first year in 20 of no executions), and the US State of Idaho broke a 17-year hiatus to execute Paul Rhodes in November 2011. More recently, we’ve seen an increase in executions in both Iran, where more than 450 of the 634 executions last year were for alleged drugs offences, and Iraq, which executed 26 people in the last week of August alone.

The death penalty remains the ultimate cruel, inhuman and degrading punishment. It violates the right to life. There should be no excuses or justifications for sentencing someone to death.

One year on: time to stand together again

A year ago we promised we wouldn’t stop campaigning. And we won’t. Today, please join us in honouring Troy’s legacy and show the world we’re not giving up our fight against the death penalty, wherever it’s used, whatever the excuse.

Change your profile picture and say ‘I am still Troy Davis’ 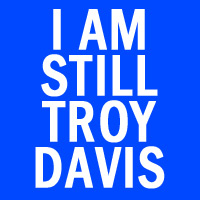 To get the full-sized version just click on the image above, and then save the bigger image.

Share this with your friends and ask them to stand with you
A year ago over a million people worldwide stood with us, and thousands of you shared Troy's story with your friends. Please use your power and influence and share once again.

Stand with us for Reggie Clemons
Reggie Clemons is currently facing execution in Missouri. Add your name to our petition

Help us continue the fight

We will continue to campaign for a world without the death penalty, for all the Troy Davises who have been killed by their judicial systems, for the Troy Davises sitting on death rows around the world right now.

But we can only do that with your help. We rely on public donations to exist - please show your support today.