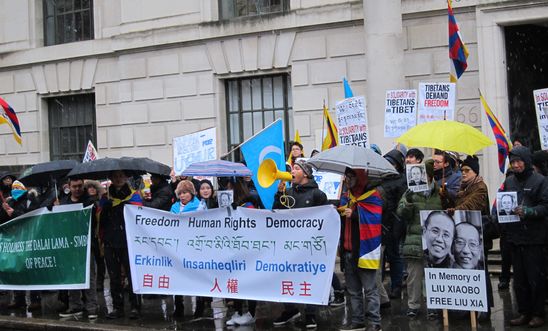 Liu Xia, poet, photographer, Liu Xiaobo’s widow, has been held under house arrest and under very heave surveillance without charge since her husband was awarded the Nobel Peace Prize in 2010.Liu Xia suffers from severe depression and heart attacks.

Lee Ming-cheh, Taiwanese national and NGO worker, supporting democracy and human rights activities in mainland China, was kidnapped from Macau to mainland China by Chinese security officials in March. Lee had been subject to enforced disappearance for six months until his trial.  Lee was sentenced to five years in prison in Novemeber for his online discussions on democracy and criticism of the CCP regime. Lee is the first non-Chinese national to be imprisoned in a long period of time for freedom of expression.

In Hong Kong, over one hundred activists were convicted for “unlawful assembly” in 2014 Umbrella Movement, in August, at least sixteen activist were sentenced to six to thirteen months for their peaceful assembly. Both Chinese authority and Hong Kong authority have violated the Bill of Rights of Hong Kong as well as the International Covenant on Civil and Political Rights ratified by Hong Kong and signed by P. R. China.

Beijing authorities have forced removal of hundreds of thousands of migrant workers from Beijing since 18 November. More migrant workers in the other big cities in China have also been evicted out of the urban areas. Beijing authorites have arressed and attempted to arrest citizen jouralists for writing on the case.  Hua Yong, an artist, one of the citizen journalists, has been forced to flee around the country.