Will the recruitment of child soldiers ever end? 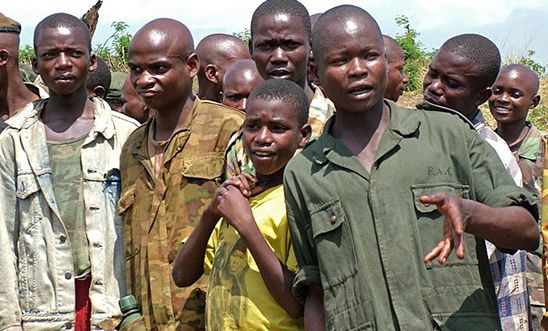 Child soldiers in the Democratic Republic of the Congo © Photographer L. Rose

Hundreds of thousands of children are currently serving as soldiers in armed conflicts all over the world. Many have lost their lives in conflict or have been left permanently disabled.

Some are illegally abducted and forced to join-up, or due to the impact of conflict on their communities, children join 'voluntarily' (often under pressure from family or members of the group) in order to secure food, to escape an abusive relationship, for revenge if many of their family members have been killed or for safety and money.

As well as live combat, the role of a child soldier can include working as a spy, planting landmines, performing domestic duties and delivering messages. Child soldiers are highly vulnerable to abuse with reports of both girls and boys being subjected to rape, sexual slavery and beatings, and being used as human shields on the front line of fighting. If they manage to escape, former child soldiers often live in fear of retaliations against themselves or their families.

Despite the introduction of laws to regulate recruitment child soldiers are still being used in live combat. Below are three countries with some of the highest rates of child soldiers in the world.

Democratic Republic of the Congo

In 2016 conflict broke out across the Kasai region of the Democratic Republic of the Congo due to the national government refusing to recognise the new traditional chief, Kamuena Nsapu.

People living in the region fled for their lives to escape the violence, resulting in thousands of children joining the Kamuena Nsapu insurgency - roughly 60% of the army is reported to be made up of child soldiers.

Armed groups in Myanmar continue to recruit children despite the military signing a joint agreement in 2012 with the government to cease recruitment of child soldiers.

Recruitment happens mostly in hard-to-access areas where fighting is taking place, such as Rakhine, Kachin and Shan states, which makes it hard to monitor. The UN are urging Myanmar’s military to establish a monitoring committee to effectively regulate recruitment.

In March 2018, Ko Aung Ko Htwe, a former child soldier, was sentenced to two years’ imprisonment for speaking in a radio interview about his ordeal. He was found guilty and charged under Section 505(b) of Myanmar’s Penal code – a vague law which severely restricts freedom of expression.

Please join us to demand freedom for Aung Ko Htwe and tell Myanmar that these laws must be reformed.

In June 2016, a peace agreement was signed by the FARC, a communist non-state armed group, marking an end to hostilities in Colombia, however, fighting continued into 2017.

The group was set up in 1964 and their mission was to fight against inequality for rural Colombians. They recruited thousands of children to join their campaign over the years.They manipulated and marginalised the children from their communities.

Many were forced to commit serious crimes - one 12-year-old reported that he was forced to torture and kill his friends. Female soldiers were forbidden to become pregnant and were be put on trial if they were found to be pregnant.