LGBTI Rights around the world 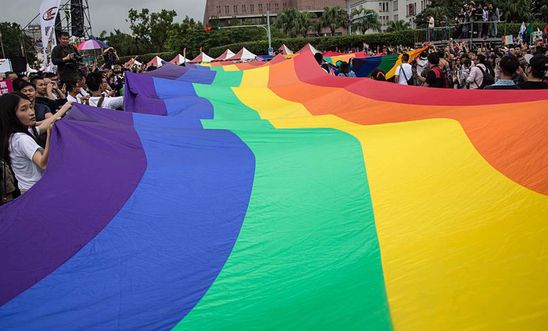 Today marks the International day against Homophobia, Biphobia and Transphobia. It is a day recognised across the globe, where people come together and raise awareness of the violation of rights that the LGBTI+ community continue to face.

Around the world, people are under attack for who they love, how they dress, and ultimately for who they are.

But, there are reasons to celebrate.

After a global Amnesty campaign, the highest court in Taiwan ruled that banning same-sex marriage is unconstitutional and today, Taiwan’s parliament passed a bill legalising same sex marriage – the first nation in Asia to do so.

In India last year, the Supreme Court decriminalised homosexuality by declaring the laws banning it unconstitutional.

In many places progress is being made, and the work of LGBTI+ communities and allies has strongly influenced new laws in Greece, Denmark and Norway that allow people to have their true gender legally recognized by the government.

It’s important that we celebrate these victories, but it is essential that we continue to fight for justice and equality for LGBTI people across the world.

In too many countries, being lesbian, gay, bisexual, transgender or intersex (LGBTI) means living with daily discrimination. From name-calling and bullying, to being denied a job or appropriate healthcare, the range of unequal treatment faced is extensive and damaging. It can also be life-threatening.

In all too many cases, LGBTI people are harassed in the streets, beaten up and sometimes killed, simply because of who they are. Sometimes, hostility directed at LGBTI people is stoked by the very governments that should be protecting them.  A state-sponsored campaign in Chechnya led to the targeting of gay men, some of whom have been abducted, tortured and even killed. In Bangladesh, LGBTI activists have been murdered while the police and government take little interest in delivering justice to the families of victims. In parts of sub-Saharan Africa, LGBTI people continue to live in fear of being found out and attacked or even murdered.

Same-sex sexual activity is a crime in 70 countries, and can get you a death sentence in eight countries, including Iran, Saudi Arabia, Sudan and Yemen. Even where these restrictive laws are not actually enforced, their very existence reinforces prejudice against LGBTI people, leaving them feeling like they have no protection against harassment, blackmail and violence.

Amnesty UK is committed to stand up for LGBTI rights and to end discrimination. In May 2018 the UK marked 30 years since the establishment of Section 28 – which banned schools and local councils from “promoting” homosexuality. Thirty years on we have made huge progress in our recognition and respect for LGBTI people, however there is still a lot more that needs to be done.

This is why we are campaigning in solidarity with the trans population in the UK and calling for changes to the law to ensure the rights of individuals who identify as trans are fully respected.

Trans people in the UK are marginalised in most aspects of life and suffer disproportionately from discrimination and violence. Our health care system makes it more difficult for them to access appropriate support, and our government invades their privacy through unnecessarily cumbersome and dehumanizing processes sanctioned by the current Gender Recognition Act (GRA) which is the law regulating legal gender recognition for trans people.

This law was ground-breaking when enacted, in 2004, but has since fallen out of step with what is considered best practice under human rights standards.

At the end of last year the government launched a consultation on the Gender Recognition Act (GRA). Thousands of you took part in the consultation, calling for equal and fair treatment for people who are trans. While the governmental process continues it is important for us to continue to visibly show our love and solidarity.

What can you do to support?

Join a Pride event near you