Have your say on the Gender Recognition Act 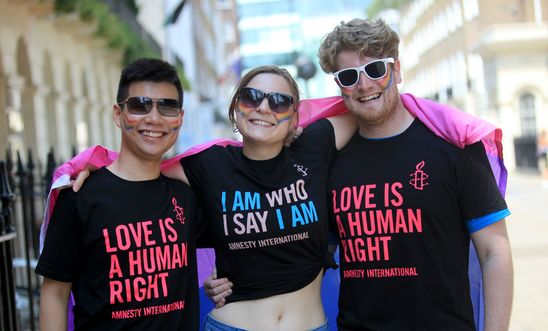 No matter who you are, you should care because GRA reform will make this country safer and more equal for all.

Make your voice count - the deadline for responses is 11pm on 19 October.

What is the Gender Recognition Act 2004?

The GRA allows (some) trans people to change their legal gender on birth certificates.

For trans people, having their gender legally recognised is critical to be able to live freely, authentically and openly. Trans is an umbrella terms which includes non-binary and gender variant people, although not all of them would identify as trans.

The law dates back to 2004 and, while it was ground breaking at the time, is now dated and hasn’t kept pace with the lived experiences of trans people and the ways in which their human rights are best protected.

Transphobia and prejudice in media coverage have contributed to the UK slipping from third to fourth in the European LGBTI rights rankings in a year So, it’s definitely time for change.

What’s wrong with the current GRA?

The current process by which trans people have their gender legally recognised is dehumanising, long and costly.

There are several layers of bureaucracy within the current process. For instance, it requires a psychiatric diagnosis of gender dysphoria, enforcing the idea that being trans means being psychologically ill – an attitude reminiscent of times when being homosexual was considered an illness that could be ‘cured’.

Then, once a diagnosis is given, a trans person has to evidence they have lived in their ‘acquired gender’ for two years and that they intend to live as that gender for the rest of their life to a panel of medical and legal experts whom they never meet. This panel will make a decision on whether you can be legally deemed the gender you say you are. This is unacceptable and contributes to reinforcing gender stereotypes of how a man or a woman ‘should live’. It also excludes the experience of non-binary people and their right to self-determination.

The process is also costly and inaccessible to some because of this. Currently trans people must pay a £140 fee – more expensive than a marriage licence or a passport. In addition, there will be other costs accrued such as medical reports and other official documents.

The process is also not accessible to all that need it. Currently, someone has to select to be either ‘female’ or ‘male’ which means there’s no legal recognition of non-binary gender identities. Further, trans and non-binary children and young people under 18 are also completely excluded - someone has to wait to become a legal adult to have their true gender legally validated.

Trans people face discrimination and violence in our society. Our health care system makes it more difficult for them to access appropriate support and our government invades their privacy through unnecessarily cumbersome and dehumanizing processes sanctioned by the current GRA. It’s time for change.

Submit your response to the Gender Recognition Act consultation – you have time until 11pm on 19th October. Encourage friends and family to do so too. This page will offer some tips on key areas for reform that Amnesty has identified, and you can find our full response here. Stonewall also has a helpful Q&A and heaps of information on the rights of trans people and the Gender Recognition Act.
If you are the parent of a trans child or a young trans or non-binary person check out Mermaids’ guidance to respond to the consultation.

The requirement for a diagnosis of gender dysphoria is intrusive and humiliating, violates trans and non-binary people’s right to privacy, and further stigmatise trans identities. In June 2018 the World Health Organisation (WHO) took the decision to remove gender dysphoria from its list of mental health disorders to classify it as a sexual health issue. The WHO has recognised, through improved understanding of the issue, that gender dysphoria is not actually a mental health condition and that classifying it as such had perpetuated stigma against trans people.

Legal gender recognition should not be contingent on psychiatric assessment, surgical, hormonal or other medical treatment. Requiring applicants to submit to a psychiatric procedure or other medical treatments not only places unnecessary barriers in the way of obtaining legal recognition of their gender; it also forces applicants to choose between their human rights: the rights to the highest attainable standard of health and to be free from cruel, inhuman or degrading treatment, and the right to private life and recognition before the law.

Transgender people from across Europe who spoke to Amnesty felt the diagnosis was based on black-and-white gender stereotypes, when in reality gender identity issues do not manifest themselves in a uniform and consolidated pattern.

“You are constantly being reviewed on the basis of how ‘girly’ or ‘manly’ you are. I spent over a year trying to convince other people that I am really a woman. It is a humiliating process, a breach of one’s self determination. I see that as absurd. No-one else has to constantly convince others of who they are. It is derogatory and stigmatizing that the issue is treated as a psychiatric one; for instance, I had to explain to my employer that I did not have mental health issues.” N, a 39 year old transgender woman from Finland.

Good implementation of non-medicalised gender recognition can be found in Malta’s Gender Identity, Gender Expression and Sex Characteristics Act 2015 which states that people have a right to bodily integrity and physical autonomy. In this jurisdiction, the gender recognition procedure is quick, transparent and accessible and the requirement of psychological or medical proof is forbidden.

A revised GRA should be based on international human rights standards. Amnesty International recommends:

2. Children and young people should have access to legal gender recognition

Trans and non-binary children and young people are currently completely excluded from applying for legal gender recognition and the government has vowed to maintain this exclusion. While trans and non-binary children and young people can change their gender on other documents, such as passports, they must wait until they turn 18 to be able to obtain a gender recognition certificate. This puts them at risk of their privacy being violated and of discrimination. Young trans and non-binary people suffer greatly from discrimination and bullying: 8 in 10 trans people bullied at school or college are self-harming.

The UN Convention on the Rights of the Child (CRC) requires states to respect the right of children to be heard and to duly take into account their views.  Legal gender recognition should be accessible to minors, taking into account the child’s freely expressed views regarding their own best interests, and in light of their evolving capacities.   A blanket age restriction would not be appropriate to achieve this - absolute denial of legal gender recognition to individuals under a given age is not consistent with existing standards regarding the rights of children.

Not all trans people identify as a man or a woman, many identify as neither or have a fluid experience of gender. If you are a non-binary person, you currently have no option to see your gender legally recognised. Of the respondents to the National LGBT survey who identified as trans, 52% identified as non-binary.

The government has a unique opportunity in reviewing the GRA to ensure that non-binary people are included and validated rather than left behind. Putting off the decision only leaves non-binary individuals in unnecessary limbo and inability to conduct their life as themselves. The gains for non-binary people and society as a whole in bringing change now far outweighs putting off further decision making.

4. Trans women are women and there is no risk to single sex services

You might have heard discussions on the media and social media trying to tip trans rights against women’s rights. These discussions are informed by prejudice and misinformation. Trans women are women and trans men are men. Making the process to obtain legal gender recognition easier and respectful of human rights will only improve the lives of trans people, it will not affect anyone else.

Gender non-conforming people suffer under patriarchal social norms as much as cis women (cis = non trans). Trans women are suffering violence and abuse as women and because they are trans. Over a quarter of trans people experience domestic violence and two women a week are killed by a partner or ex-partner in England and Wales.

We need prevention, justice and a well-funded and effective response based on the needs of survivors. Cuts to frontline organisations, in particular those serving marginalised communities, changes to commissioning and gender neutral approaches pose a threat to the safety of all women.

Research interviews conducted by Stonewall with 15 single sex service providers has shown that domestic and sexual violence services in England and Wales have been supporting trans women in their single-sex women-only services for some time with many taking proactive steps to ensure their services are trans-inclusive.

These services take a victim-centred approach, supporting everyone through their specific circumstances which will be different based on race, sexuality, disability, economic autonomy, migration status and other factors. The Bureau for Investigative Journalism revealed local authorities across England have cut their spending on domestic violence refuges by nearly a quarter (24%) since 2010. A snapshot survey of 40 refuge managers across England revealed they had turned away more than a thousand women in six months alone. Recent data from Galop LGBT+ domestic abuse casework service, finds over half (55%) of all lesbian, bisexual and trans women who have been supported by the organisation in the past five years identify as having a disability (e.g.: mental health issues) and 50% belong to BME minority. However according to monitoring of refuge spaces by Women’s Aid there is an acute lack of LGBT+-specific refuge services in England and less than 1% of refuges (two refuges in London and one in Brighton) provide specialist support to LGBT+ survivors.

All survivors have a right to tailored, rights-based support and this can be achieved only by long-term, sustainable funding. Amnesty International UK stands in solidarity with all women against patriarchal violence.

Completing the GRA consultation is one simple thing you can do to stand up for trans equality. On your marks, get set, type.