Aisha el-Shater, 41, daughter of Muslim Brotherhood senior leader Khairat el-Shater, and her husband lawyer Mohamed Abo Horeira are on trial by the Emergency State Security Court on bogus charges stemming from their family affiliations and peaceful exercise of their human rights. The Egyptian authorities have subjected Aisha el-Shater to torture by holding her in prolonged solitary confinement, barring any family visits for more than three and a half years and deliberately denying her access to adequate healthcare even though she has a serious and potentially life-threatening health condition. 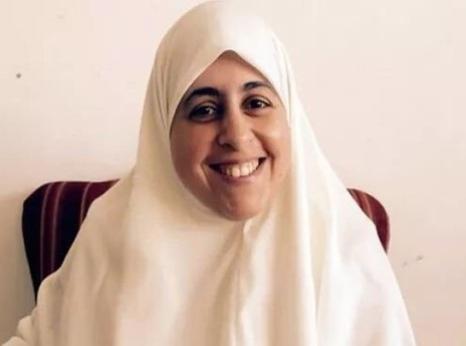 Aisha el-Shater, 41, daughter of Muslim Brotherhood senior leader Khairat el-Shater, and her husband lawyer Mohamed Abo Horeira are on trial by the Emergency State Security Court on bogus charges stemming from their family affiliations and peaceful exercise of their human rights. The Egyptian authorities have subjected Aisha el-Shater to torture by holding her in prolonged solitary confinement, barring any family visits for more than three and a half years and deliberately denying her access to adequate healthcare even though she has a serious and potentially life-threatening health condition.

On 1 November 2018, Aisha el-Shater and her husband Mohamed Abo Horeira were arrested from their home in Nasr City, Cairo. Sources told Amnesty International that Aisha el-Shater was forcibly disappeared for 20 days, during which period security forces refused to provide her family any information about her fate and whereabouts. Amnesty International learned from informed sources that during this time, she was held at the headquarters of the National Security Agency in the Abbasiya neighbourhood of Cairo and subjected to beatings and electric shocks. On 21 November 2018, she appeared before the Supreme State Security Prosecution (SSSP), where prosecutors ordered her pre-trial detention pending investigations on accusations of “membership in a terrorist group” ''receiving financing for a terrorist purpose'' and ''participating in a criminal agreement intended to commit a terrorist crime''. Before her arrest, she spoke out on her account on Facebook about human rights violations in Egypt including enforced disappearances, torture and other ill-treatment in places of detention. Prior to his arrest, lawyer Mohamed Abo Horeira represented detainees suspected of membership in the Muslim Brotherhood.

On the day of their arrest, 1 November 2018, the Egyptian authorities launched a series of raids, arresting at least 31 human rights defenders and lawyers; 10 women and 21 men. The Egyptian Coordination for Rights and Freedoms (ECRF), which documented enforced disappearances and the use of the death penalty, and provided legal aid to victims of human rights violations, was particularly targeted by the crackdown. In a statement published on 1 November 2018 announcing the suspension of its human rights work, ECRF cited the situation in Egypt as incompatible with human rights work and demanded the UN Human Rights Council to intervene.

On 23 August 2021, the SSSP referred Aisha el-Shater, Mohamed Abo Horeira, human rights defender and founder of the ECRF, Ezzat Ghoniem, human rights lawyer Hoda Abdelmoniem and 27 other defendants to trial in front of the Emergency State Security Court (ESSC). The SSSP indicted them on various charges, including membership in a terrorist group (the Muslim Brotherhood), disseminating false news about human rights abuses by security forces through a Facebook page titled "the Egyptian Coordination for Rights and Freedoms", funding a terrorist group and possession of pamphlets to promote the terrorist group’s objectives.

On 25 October 2021, President Abdel Fattah Al-Sisi announced that he would not extend the state of emergency, in force since 2017, which allowed for the creation of ESSCs. Article 19 of the law governing the state of emergency stipulates that ongoing trials are to continue even after the state of emergency is no longer in force. In the three months preceding the decision not to renew the state of emergency, the Egyptian authorities referred at least 26 human rights defenders, activists and opposition politicians to trial before emergency courts. Proceedings in front of ESSCs are inherently unfair. Defendants are denied the right to appeal their convictions and sentences to a higher tribunal. Only the president retains the power to authorize, quash or commute sentences or to order a retrial. Other documented fair trial violations include the right to have adequate time and facilities for the preparation of their defence, right to communicate with counsel of their own choosing and right to a public hearing. In addition, judges at the ESSC routinely deny requests by lawyers to photocopy casefiles, which in some cases exceed 2,000 pages, instead instructing them to review them in court. Prosecutors and judges have also failed to provide copies of indictment orders to defendants and their lawyers, undermining their right to be informed of the exact nature and cause of charges against them. Authorities banned Aisha el-Shater from meeting with their lawyers except in court, violating her right to adequate defense.
In recent months, dozens of political opponents and critics have been convicted of bogus charges following grossly unfair trials by ESSCs. Among them are politicians Zyad el-Elaimy and Hisham Fouad, who were sentenced in November 2021 to between five and three years in prison, respectively, following an unfair trial by an ESSC simply for criticizing Egypt's human rights record and economic policies. Security forces arrested them in June 2019, shortly after they met to discuss running in the 2020 elections and detained them without trial for over two years. On 29 May 2022, an ESSC sentenced 25 political opponents, including politician Mohamed al-Kassas and former presidential candidate Abdel Moneim Aboul Fotouh to 10 and 15 years in prison, respectively, after convicting them of trumped-up terrorism-related charges and spreading false news.

Aisha el-Shater’s father, Khairat el-Shater, has been imprisoned since July 2013, when the military ousted former president Mohamed Morsi. Since then, the authorities banned the Muslim Brotherhood and rounded-up and prosecuted its leaders and tens of thousands of suspected members and supporters.