On 4 July 2022, a Misdemeanours Emergency State Security Court (ESSC) convicted Egyptian researcher Ahmed Samir Santawy of spreading "false news" and sentenced him to three years’ imprisonment. His conviction is based solely on social media posts criticizing human rights violations in Egypt and the state’s mishandling of the Covid-19 pandemic. Verdicts by ESSCs cannot be appealed. Ahmed Samir Santawy is a prisoner of conscience, who has been arbitrarily detained since February 2021, and he should be immediately and unconditionally released. 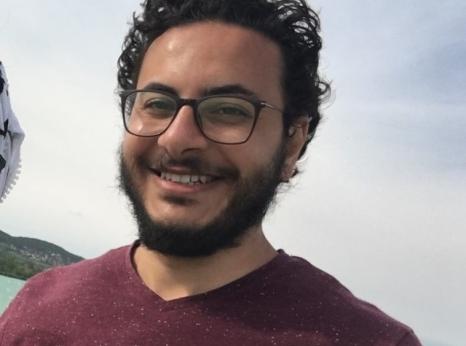 On 4 July 2022, a Misdemeanours Emergency State Security Court (ESSC) convicted Egyptian researcher Ahmed Samir Santawy of spreading "false news" and sentenced him to three years’ imprisonment. His conviction is based solely on social media posts criticizing human rights violations in Egypt and the state’s mishandling of the Covid-19 pandemic. Verdicts by ESSCs cannot be appealed. Ahmed Samir Santawy is a prisoner of conscience, who has been arbitrarily detained since February 2021, and he should be immediately and unconditionally released.

Ahmed Samir Santawy is a researcher and a student of anthropology at the Central European University in Vienna, Austria. His research focused on the history of reproductive rights in Egypt. He was arrested on 1 February 2021, while on vacation in Egypt, and has been arbitrarily detained since. Following his arrest, he was subjected to enforced disappearance for five days before appearing before the Supreme State Security Prosecution (SSSP), a special branch of the Public Prosecution responsible for prosecuting crimes that relate to “state security”. The SSSP initially ordered his detention pending investigations in Case No.65/2021 over unfounded terrorism-related accusations, on the basis of secret investigations by the National Security Agency (NSA) that neither he nor his lawyers have been allowed to examine. On 22 May 2021, the SSSP opened a new criminal investigation against him under Case No.774/2021 and referred him to trial on 28 May 2021 in the new case.

During the hearing on 22 May 2021 before the SSSP, Ahmed Samir Santawy told prosecutors that he had been beaten the previous day by the deputy warden of Liman Tora prison. His lawyers requested his transfer to the Forensic Medical Authority to examine his injuries. The family of Zyad el- Elaimy, a former parliamentarian and human rights lawyer arbitrarily detained in Liman Tora solely for his peaceful political activities, also lodged a complaint with the public prosecutor about prison officials’ beating him and Ahmed Samir Santawy on 21 May 2021. On 25 May 2021, the Ministry of Interior denied the allegations which it attributed to media channels supportive of the outlawed Muslim Brotherhood. No investigations have been conducted into these claims, as well as Ahmed Samir Santawy’s previous complaints to prosecutors of being subjected to enforced disappearance, torture and other ill-treatment following his arrest on 1 February 2021 by the NSA.

Ahmed Samir Santawy went on a hunger strike for 40 days in June 2021 in protest against his original conviction on 22 June 2021. On 28 January 2022, the UN Working Group on Arbitrary Detention (UNWGAD) found that the Egyptian government had arbitrarily detained Ahmed Samir Santawy in violation of international human rights law and called for his immediate release.

The inability to appeal verdicts by emergency courts denies defendants a critical guarantee for a fair trial to have their conviction and sentence reviewed by a higher tribunal. The conviction of Ahmed Samir Santawy over social media posts by an exceptional court sends a chilling message on the erosion of rule of law in Egypt, and the use of such courts as a tool of repression. In the months leading up to the lifting the state of emergency in Egypt in October 2021, the SSSP referred dozens of opposition politicians, human rights defenders and activists, including Abdelmoneim Aboulfouttoh, Ezzat Ghoneim, Alaa Abdel Fattah, Zyad el-Elaimy, Mohamed Baker and Mohamed Radwan "Oxygen" to trials in front of the ESSCs. Since October 2021, ESSCs convicted dozens of political opponents, critics and human rights defenders, sentencing them to between three and 15 years’ imprisonment after grossly unfair trials.  Article 19 of the law governing the state of emergency stipulates that ongoing trials are to continue even after the state of emergency is no longer in force.

Blanket prohibitions on the dissemination of information, based on vague and ambiguous concepts such as “false news” or “spreading misinformation”, are incompatible with international human rights law and standards since they do not meet the principles of necessity and proportionality. The UN Human Rights Committee has stated that general prohibitions of expressions of an erroneous opinion or an incorrect interpretation of events contravene article 19 of the International Covenant on Civil and Political Rights, to which Egypt is a party. Under international law, detention is arbitrary even if allowed by national law if it results from the exercise of human rights or is on the basis of unfair proceedings.