On 15 November, Moroccan security forces broke into the house of Sultana Khaya, Sahrawi woman activist and defender of Sahrawis' right to self-determination. They raped her and sexually abused her sisters and 80-year-old mother. This is not the first time Moroccan forces have committed acts of torture and other ill-treatment against Sultana Khaya and her family, who have been under de facto house arrest since November 2020. 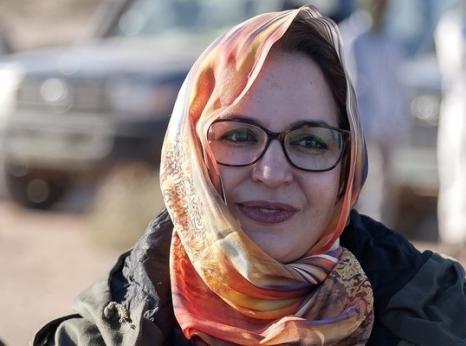 On 15 November, Moroccan security forces broke into the house of Sultana Khaya, Sahrawi woman activist and defender of Sahrawis' right to self-determination. They raped her and sexually abused her sisters and 80-year-old mother. This is not the first time Moroccan forces have committed acts of torture and other ill-treatment against Sultana Khaya and her family, who have been under de facto house arrest since November 2020.

Sultana Khaya is the president of an organization called the ‘League for the Defense of Human Rights and against Plunder of Natural Resources’ and is known for her vocal activism in defence of the right of self-determination for the Sahrawi people. She is also a member of the Sahrawi Organ against Moroccan Repression (ISACOM).

The unlawful detention of Sultana Khaya and her family is part of a wider crackdown by the Moroccan authorities on Sahrawi activists and critical voices within Western Sahara, which escalated following clashes between Morocco and the Polisario Front in November 2020. A growing number of Sahrawi activists have been subjected to targeted attacks in the past year by the security forces, away from the attention of international media.

This recent attack by the Moroccan security forces is not an isolated incident. On 10 May 2021, Security forces raided Sultana Khaya's home, cuffed her sister's arms and legs and stole valuables, including Sultana Khaya’s phone and computer, after she started a campaign called "my flag on my rooftop" #علمي_فوق_منزلي.

They also arrested and tortured three activists who were there to support her and her family. Two days later, on 12 May 2021, dozens of masked members of the security forces raided Sultana Khaya's house, assaulted and attempted to rape her, and raped her sister. Security forces have previously removed the electricity meter to leave Sultana Khaya and her family with no electricity.

From the start of her house arrest, the authorities have failed to present Sultana Khaya with an arrest warrant or a court order, or to inform her of the reason for her arrest. She was only told verbally, by the head of the police forces in Boujdour, that she was forbidden from leaving her house.

Under international human rights law, house arrest is considered as a form of detention and requires certain safeguards to be considered lawful. According to the UN Human Rights Committee’s General Comment 35 on Article 9 of the International Covenant on Civil and Political Rights, liberty-depriving measures, including house arrest, must not be arbitrary and must be carried out with respect for the rule of law and allow a meaningful and prompt judicial review of detention. Deprivation of liberty, including house arrest, is arbitrary when it results from the exercise of human rights, including the rights to freedom of expression, association and peaceful assembly.

Western Sahara is the subject of a territorial dispute between Morocco, which annexed the territory in 1975 and claims sovereignty over it, and the Polisario Front, which calls for an independent state in the territory and has set up a self-proclaimed government-in-exile in the refugee camps in Tindouf, south-west Algeria. A UN settlement in 1991, which ended fighting between Morocco and the Polisario Front, called for a referendum for people of Western Sahara to choose independence or integration into Morocco. The referendum has not yet been held.

In recent years, access to Western Sahara has grown increasingly difficult for external monitors as the human rights situation deteriorates. In 2020, Moroccan authorities prevented at least nine lawyers, activists, politicians and journalists from accessing Western Sahara. The UN Security Council has ignored calls by Amnesty International and others to add a human rights component to the United Nations Mission for the Referendum in Western Sahara (MINURSO), which would allow for monitoring and reporting on human rights abuses.