Prisoner of conscience's health at risk

Prisoner of conscience Hamed Gharehoghlani is suffering from symptoms that precede dangerous epileptic seizures due to the authorities’ persistent refusal to provide him with specialized health care and medication. He appealed his sentence of 14 years and one month’s imprisonment to the Supreme Court on 24 January 2021. He must be released immediately and unconditionally. 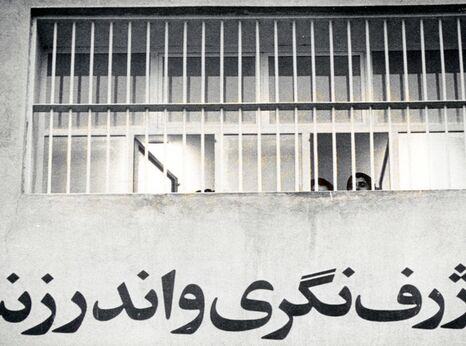 Prisoner of conscience Hamed Gharehoghlani is suffering from symptoms that precede dangerous epileptic seizures due to the authorities’ persistent refusal to provide him with specialized health care and medication. He appealed his sentence of 14 years and one month’s imprisonment to the Supreme Court on 24 January 2021. He must be released immediately and unconditionally.

Hamed Gharehoghlani was arrested by ministry of intelligence agents in Urumieh, West Azerbaijan province, on 27 June 2020. He was taken to the detention centre of the ministry of intelligence in Urumieh, where he was held in solitary confinement for two weeks, without access to his family and a lawyer, and then transferred to the central prison in Urumieh. According to an informed source, while held in solitary confinement, he was subjected to various forms of psychological torture aimed at obtaining forced “confessions” including persistent use of degrading verbal insults and profanities, threats of execution, and threats to kill his mother, particularly if his case is publicized. He was also denied access to his medication and deprived of fresh air and natural light. The ministry of intelligence agents summoned his mother and sister for interrogations several hours after his arrest, threatened to have his mother dismissed from her teaching position, forced them to sign statements undertaking not to “insult” the Supreme Leader and “Islamic sanctities” and warned them against speaking to anyone about their relative’s detention. Ministry of intelligence agents repeatedly accused his family of being in contact with the People’s Mojahedin Organization of Iran (PMOI) and mentioned, while yelling and hurling insults at the family, that they have two relatives abroad who support the PMOI. His family persistently denied supporting the PMOI or being in contact with their relatives.

Hamed Gharehoghlani’s trial before Branch 2 of the Revolutionary Court in Urumieh was grossly unfair. The trial consisted of one session, which took place behind closed doors on 28 September 2020 and lasted only 10 minutes. The judge presiding over the session showed hostility and a lack of impartiality by repeatedly interrupting Hamed Gharehoghlani, openly supporting the accusations of the intelligence agents against him and calling him a “terrorist”. Hamed Gharehoghlani was only allowed to meet with his lawyer once in prison several weeks before his trial in the presence of prison and intelligence officials. The authorities have refused to provide him with a written copy of the verdict. On 29 November 2020, they only gave him a few minutes to take a glance at the verdict and then asked him to sign a statement to confirm that he had been notified of his conviction and sentence.

In early September 2020, Hamed Gharehoghlani suffered from suspected COVID-19 symptoms, including severe dry coughs, fever, and shortness of breath. Despite being at higher risk of serious health problems or death due to his pre-existing health problems, prison officials did not conduct a diagnostic test; instead, they gave him some unidentified medication at the prison clinic and returned him to his usual overcrowded place of confinement.

The International Covenant on Economic, Social and Cultural Rights, to which Iran is a party, recognizes the right of every person to the highest attainable standard of health. The UN Standard Minimum Rules for the Treatment of Prisoners (Mandela Rules) state that prisons must provide adequate medical care to prisoners without discrimination and free of charge. The Mandela Rules provide that “Prisoners who require specialized treatment or surgery shall be transferred to specialized institutions or to civil hospitals” and clinical decisions should only be taken by health-care professionals and not be overruled or ignored by non-medical prison staff. Amnesty International has documented numerous cases where the Iranian authorities have deliberately denied health care to prisoners of conscience, putting their lives and health at grave risk. In some cases, Amnesty International has considered that the abusive conduct reached the threshold of torture as it inflicted severe pain and suffering on the victims for the purposes of punishing, intimidating or humiliating them or obtaining forced “confessions” from them.

The right to freedom of opinion and expression includes the right to be critical of the political social system espoused by the authorities and the right to peacefully advocate, individually or in association with others, for any political ideas or visions so long as the ideas espoused do not advocate hatred constituting incitement to discrimination, hostility or violence. Penalizing individuals because of the mere fact that their expressions are considered to be insulting to a public figure is a serious violation of the right to freedom of opinion and expression, protected under the International Covenant on Civil and Political Rights, to which Iran is a state party.

The Iranian authorities have a history of targeting family members of those who have real or perceived ties with the PMOI. During the 1980s and 1990s, the PMOI engaged in armed activities against the Islamic Republic from its base in Iraq. The organization was eventually disarmed by the US following the 2003 invasion of Iraq and from 2008 onwards, the European Union and other governments have lifted the designation of the PMOI as a “terrorist “organization on the grounds that the PMOI no longer advocates or engages in armed opposition to the government of Iran.